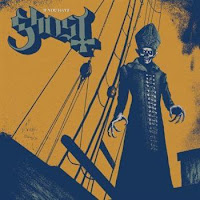 The strength of the If You Have Ghost EP, or Ghost's choice in cover songs in general throughout the band's career, is that they take them and make them their own, instantly broadening the pool of material they can pull on for their set lists. Granted, some of the songs might be kept closer to the belt of their originators, and others given a little bit more of a metallic injection, but for any flaw I might pick out in the band's career, the cover songs that they occasionally bless us with would never be one of them. And this is exactly that, a short-player with four tracks you might not expect but lend themselves very naturally to the band's influences in everything from progressive and psychedelic rock to disco.

"If You Have Ghosts" is a very accessible, sweeping, uplifting sort of rock cut that works well in their hands, or alongside the other tracks they've written themselves which give off a mock Christian arena rock vibe, such as "He Is" on Meliora. I've addressed the ABBA cover "I'm a Marionette" on the review of the Infestissumam full-length, but if you don't own the Deluxe version of that then it's a treat to have it here among its neighbors. I'll reiterate that Ghost could cover almost any single tune in that band's history and it would probably work, the groups, despite their genre differences, share that unbridled sense of ear-pleasing pop quality. I was not as familiar with the original "Crucified" or the band Army of Lovers, but this one definitely recurs that hymnal concept that the band really likes to play on with its blasphemous Luciferian theatrics. It's a little goofy when he gets to the more spoken word bit in the bridge, but it's certainly an aesthetically fit for the Papa Emeritus II persona Tobias was using to front the band at this time.

The cover I was most looking forward to, Depeche Mode's "Waiting for the Night", is given a more doomed, melancholic edge than it already possessed, with a pungent fuzz to the guitars, and little organs that glimmer through almost too cheerfully from the somber weight of the tune. Still pretty cool, but I see why they kept it tucked behind the others. There's also a live offering of "Secular Haze" to round out the material, which sounds good in that setting, but just isn't one I find myself revisiting often, much like its studio counterpart. The production on the covers is quite good, I'd say even a little better than the Infestissumam material, with the guitars balanced better against all the vocals, organs, percussion, and bass lines. The EP is a decent value if you're a fan of the band, I might have preferred a full-length of covers without the live tune interfering but this thing is usually sold for only a couple bucks, and if you don't have the tunes elsewhere it's worth a pickup if not some towering success of a product.