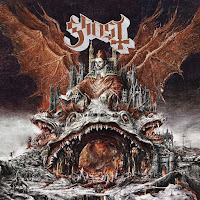 Prequelle did not woo me quite as mightily as its predecessor, but over the year of 2018 it did grow on me to a point that I listened to it in regular rotation (ergo, the stuff I'm constantly spinning that is not queued for reviews). Part of this is probably that of all the full length Ghost releases, this one shows the least amount of growth or change from the last, a trait I had really come to expect from them; but nah, this is largely Meliora Part II. That's not necessarily a bad thing, since there are plenty of small details here which strike out on their own, and there's no problem with a band dwelling in its comfort zone for spell...hell, there are major metal bands that, in retrospect, I wish had spent MORE time in their comfort zones, rather than teetering off into an oblivion of mediocrity, or trying to keep scoring with the times and instead getting dunked on.

The "Rats" single was the first I heard of this, like anyone else, it was a fun tune, lot of energy, like a livelier "Square Hammer", and I really dug how they refrain that evil melody at the end from the instrumental on the previous album (it's also used in Prequelle's choral intro "Ashes"). I think it was also a pretty good choice to front-load the more metallic material here, letting us know that Tobias still considers it an important component of their sound, before they traipse off into the more varied territory. "Faith" is probably the hardest tune on the album, which surprisingly drew some parallels to Chastain of all things, with that neo-classical shred line reminding me of David's playing, and the verse groove highly reminiscent of some of the stuff on For Those Who Dare. Coincidental, most likely, but I found that amusing, and the song pretty kickass with a great groove to it and a really awesome, memorable chorus, once again using their trademark organs to supplement a killer vocal hook. If you've got a version containing it, they also do a heavy cover of the Pet Shop Boys' "It's a Sin", a natural fit to the Ghost style, although I thought the Gamma Ray cover off Power Plant was a far cooler, more metallic transformation of the pop gem.

Not to take away from the mellower material here, because a lot of it is quite catchy, like the folksy piano-driven ballad "Pro Memoria", which picks up quite nicely even though a couple of Forge's vocal lines sound a little goofy in the bridge. "Witch Image" is a nice, driving rock track that I'm surprised didn't turn into a radio single, although the dramatic butt-rocker "Dance Macabre" accomplished exactly that. "Miasma" is another standout, a steady, proggy instrumental that is satisfying throughout its escalation, leads, and tons of ear-worm synthesizer lines. It's not the only instrumental present, but the calmer "Helvetesfönster" didn't impact me quite as much, despite the nice Medieval melodies buried in there. And that's rather an interesting decision, to have about 11 minutes of the album, a full quarter of its playtime (excluding covers) devoted to instrumental journeys, which are mostly successful. Perhaps Tobias could score a film, is all I'm saying, I can certainly imagine some lush, 80s-like young adult fantasy with this sort of music all over it.

There's another cover of Leonard Cohen's "Avalanche" on the deluxe edition, but as well produced as it is, I just didn't enjoy Tobias' rambling vocal style over it, he seems a little weak when he's in that mid-range, spoken word inflection, and the ascending power of the instruments in this one could have used a little more brawn over it. Other than this and a few of the other, slightly less impressive tracks, there are few complaints to be had. The production is excellent, and I'd argue even more dynamic than on Meliora. The lyrics are still pretty good, even if they're not quite as emotionally relevant to me as they were on the prior album. There some cool guest spots nestled in here, like the esteemed Steve Moore on synthesizer, or Mikael from Opeth contributing some acoustics. The Cardinal Copia persona, which I envision to be more of a laid back Papa Emeritus, is fun...let's say Papa Emeritus if he was guest starring on Three's Company. Papa Emeritus if he watched women's prison exploitation flicks while smoking fat cigars. Papa Emeritus if he could tear up a disco floor, which he basically does, only in a city street with a lot of carnage strewn about him. And Zbigniew Bielak's cover art, despite clearly being referenced from a certain old Sepultura record, is just awesome looking. Prequelle's another win to me.