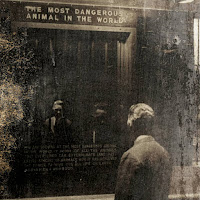 Moonreich might not stand out like some of their trendsetting French peers, and they don't pursue quite the same level of avant garde in their compositions, but they've been on a tear with their last few albums Pillars of Detest and Fugue, rich and roiling exemplars of aggression, evil, and atmosphere that would sate not only fans of higher end European black metal but I think also a lot of black/death fans, of say, Behemoth or Belfegor. The Wormgod EP is not as robust an effort as those two annihilations, but it does a serviceable job at sweeping up the ashes with some largely blasting, blitzing material that highlights the extremity that beats at the heart of main-man Weddir's soul like a crack-addled drum.

Basically a way to think of tracks like "The Swinging Noose" is as hyper Euro blasting circa Marduk or earlier Enthroned, but with a bedrock of faster Morbid Angel-like riff patterns, shifts into slower and dense groove riffs, atmospheric bits like samples, dissonant higher guitars ringing off into the vaulted darkness beyond the blasts and rhythm tracks. But then they'll throw on a slower, more melodic and somber cut like "They Burn Without Wings" and change up the formula, where you can hear the bass-lines and the incandescence of the higher strings a lot. They definitely tease a little dark ambient/industrial around the corners and shadows of such material, but the bulk of this EP does consist of the faster material, performed with neck-breaking certainty. I was most surprised by their cover of Depeche Mode's "Broken" to close out the release, where the vocals are switched towards a more loyal, lower pitch clean, but they still include little periods where the drums are blasting away to make it feel like a more original rendition of the tune, and it's quite wonderful, my favorite part of this alongside "They Burn Without Wings".

I do feel like the French scene is still dominated by its mysterious or outspoken, controversial luminaries like Peste Noire, Blut Aus Nord, Glorior Belli or Deathspell Omega, but really there is this substrata of bands who are all extremely talented and ready to burst forth from the crust at any moment if the world would just give them a listen. A number of these are focused more in recreating a Medieval, atavistic feel, but others like Moonreich are just exceptionally good at marrying just enough of an obscure gloom to blasting extremity, while possessing an aptitude at the broader range of dynamics when desired. If you're new to the band, then I'd probably nudge you over towards one of the prior two albums for a fully immersive, destructive experience, but the new material here will certainly serve as a good balance if they were to mix it into set lists, and the cover tune is sweet.