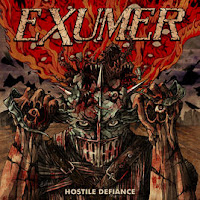 I had heard quite a number of good things about this latest album from Exumer, or at the very least the idea that the band was really holding it together during this new phase of their career, far more ambitious and productive than ever they were during the first two records in the 80s. I can say upon hearing Hostile Defiance that this is, to an extent, true. The loud, brick-like production on this record is arguably the best of their career, the style is unapologetic early thrash with no real diversions into attempting anything out of the ordinary, and yet there is a good deal of emphasis placed on the songwriting to keep the contents of the album diversified and consistently engaging, like the better thrash albums of the 80s often did. This is no banal, pizza thrashing from Exumer, but their most punchy and studied album to its day, and if the parameters for your own enjoyment of this genre are simply that it sounds good and makes your head bang, then stuff like this is your bread and butter.

Unfortunately, for myself, there's not nearly enough of an impact in terms of the riffing patterns, the vocals or the overall personality of the album. If you just described to me the average German thrash style of the 80s, this would check off all the boxes except for the one that makes me want to listen through it again. The way these guys lay out the guitar patterns is just really basic stuff you've heard from a hundred other bands, getting the job done without excelling, creating few sequences of notes that last longer in the memory than it takes to listen through them on the CD. They do a good job of affixing some competent lead guitars or smaller melodic patterns to help each of the tracks seem full and fulfilling, but I think the entire record of the 42 minutes of the album blew right past me without a single rhythm guitar part ever demanding that I play it back immediately. The mid-paced stuff is basically just Exodus 101, maybe cruising along appreciably in "Dust Eater" when the solo breaks out, but otherwise it just sounds like a paraphrased "Toxic Waltz". The faster tracks like "King's End" definitely have a nice crunchy thrust to them, sometimes swerving into power/thrash territory with Artillery-like riffs, but even when they burst out the melancholic sounding harmony for the chorus part it just doesn't hit that money shot you're expecting.

Drums are particularly peppy here, and sound great, while the bass just plods along with the rhythm guitar line, forgiven to an extent since Mem V. Stein is also handling the vocals, which still sound like a mix of stuff like Vendetta, Tankard, Slayer and Defiance, a pinched anger that sounds angry and nasally enough, and is often laden with some nice reverb and effects for emphasis, but just doesn't inspire as much as the thrash greats do. Structurally, I think this is a fairly solid album, it delivers the full package you're seeking if you want second tier 80s thrash done in 2019, with the exception of having really memorable songs or even parts of songs that you've already got sitting around your music collection in droves. It's far from rubbish, but even with the interesting choice of cover songs added in, for Scorpion's "He's a Woman, She's a Man" and Entombed's "Supposed to Rot", both rendered appreciably into Exumer's pure thrash style, this album just doesn't give me any more than the basic nutritional content I can get from the average, competent thrashing. Even the title feels very bland and obvious, like they just threw two words together that fit the bill. I mean I guess at least is isn't Peaceful Defiance. I can't even evaluate it more highly than The Raging Tides, because while it might have stronger production, I wouldn't say there was anything else that stood above its predecessor.  I don't want to sound too down on the thing. Sure, it's good enough, but I want great.