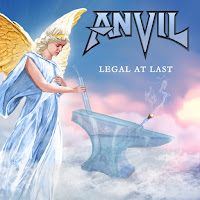 With cover art and an album title double entendre that I can hardly keep a straight face over, Anvil rolls out its 18th studio full length effort. After an inconsistent decade, which started off strong with Juggernaut of Justice, my favorite that they'd put out since the 80s, it's a little difficult to build up any sort of expectations for whatever is going to happen next. The Canadians are survivors, I'll give you that, whether their hit documentary film spurred them on through the 21st century or not, but after a couple relative duds like Hope in Hell and Pounding the Pavement, any hope of a new winning streak was cut rather short. Still, they weren't all bad, 2016's Anvil is Anvil was a fun enough outing, and Legal at Last offers more along those lines, a dozen tracks of primitive, meaty heavy metal which offers no surprises whether you've been following the band for 4 weeks or almost 40 years...but then again, you won't need any.

As you've guessed from the title, this one's going to have a handful of Anvil's crushing sonic love letters to the marijuana, but despite the silliness with which their lyrics are often imbued, the music itself is no jokes, just some energetic heavy metal, starting out faster with the title track, and then going into one of their loping, mid-pacing, burning metal numbers "Nabbed in Nebraska" which will slightly remind you of fare like "Metal on Metal", "Concrete Jungle" or "Forged in Fire" only not nearly so legendarily catchy. But Robb Reiner's drums sound really powerful throughout, and they pull off a nice lead bridge and some backing vocals heavily redolent of old Twisted Sister. Other fun numbers include "Chemtrails", the rumbling "Gasoline" and the twisting "Talking to the Wall", a cool, darker, menacing cut which reminded me a lot of some of my favorite Anvil stuff on discs like Pound for Pound or This is Thirteen. Great riffs here, with a steady mid-paced tremolo picking and Lips sounding as bent as angry as he gets these years. And the hits don't stop coming there, in fact there aren't really any tracks here that I'd consider weak, and the vast majority of the material is hard hitting and memorable enough that I've been enjoying repeat listens.

Honest, blue collar heavy metal with a monumental rhythm section. The Lips/Reiner/Roberston lineup has really solidified over the last few years and they make this all sound effortless, not that it's particularly technical or nuanced for the genre but they clearly sat there and managed to come up with a dozen ragers at varied tempos, with no real filler. Hell, they even save the heaviest track "No Time" for the end, another one that throws me back to their darker sounding stuff from the past, and another killer lead sequence. Anvil has a distinct sound in their field, instantly identifiable, and this one plays to all of their strengths without ever drifting off into some of the mediocrity that has crippled more than half of the records they've put out since the early 90s. Should satisfy the long term audience as well as younger folks just looking for some bar-busting, catchy heavy metal with zero pretentiousness anywhere to be found. You might not be able to hammer out an effective weapon or tool on that glass mascot bong, but they'll certainly club your ears in with this record before fleeing town with your old lady and a bag of ganja.