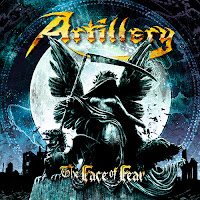 I always want to root for a band like Artillery on the basis that they once provided me with an album so good that even thinking about it results in astonishment. I'm talking about 1990's By Inheritance, of course, a standard of accomplished power/thrash riffing and furious energy that to this day has never been surpassed in my estimation. Sure, there have been other artists to evolve the style in some other impressive parallel, but this remains one of my absolute favorite metal efforts 30 years later. Not to marginalize the Danes' first two records, which were great markers on the road, but there's a reason why the band has more or less been trying to remake their magnum opus for a few decades now and just not seeing the same success.

I can't knock all their output, because albums like B.A.C.K. and even When Death Comes had their moments, but since that time the band has lapsed into a cycle of endlessly diminishing returns, not albums that lack for professional production or competent musicianship, but in producing the kind of passionate, inspired craftsmanship that was led so much by brothers Michael and Morten Stützer and their insanely intricate riffing. Nothing they've put out was really bad, but records like Legions and Penalty by Perception seemed to me like going through the motions. Is The Face of Fear, the 9th full-length offer, going to right the ship? I'd say it is, to an extent. There's nothing fundamentally different about what the band has assembled here. They've still got Michael Bastholm Dahl creating his more melodic, power metal vocal passages over a riff-set that certainly dwells in a similar aesthetic space to By Inheritance, and he's definitely become comfortable here. Sure I preferred Flemming the most, even for his flaws he just had such a wild presence, but Dahl's range and delivery are tight enough here that he feels like a natural over the tunes, with some nice reverb echoing his voice over the meaty rhythm guitar onslaught so vital to their music.

Speaking of those guitars, they don't come even close to hitting that 1990 wizardry, often settling into some more banal groovy thrash riffs, but there are plenty here that sound like something new the two have come up with instead of just repeating themselves, such as in the strutting "New Rage". You'll hear plenty of parallels here, like how parts of "Thirst for the Worst" seem reminiscent of "Terror Squad" with the flow of the chords, but I'd say a good 30-40% of the album feels like a breath of fresh air, even if it isn't insanely catchy. The drums are quite good, the atmosphere of the album is also on point with the balance of aggressive lower end guitars and Dahl's soaring presence. There aren't really any throwaway tunes, although the album does go a little soft through the power ballad "Pain" and its ensuing instrumental "Under Water". But they correct course there, with one of the more blistering cuts "Preaching to the Converted", nearly worthy of By Inheritance with an Eastern flair to the guitars, and then a pretty solid re-recording of their old demo track "Mind of No Return" which, lets be honest, crushes its predecessors.

In sum, it's a solid package, with decent lyrics, artwork, production, and songwriting that at least compelled me through a half dozen or more listens in the last couple years, something I cannot say for its director predecessor. In fact, this is the second best album in the 'modern' reunion era of Artillery that starts with When Death Comes. I was a little torn up at Morten Stützer's tragic passing last year, and I can't imagine the band is ever really going to sound the same going forward; but as they're apparently continuing, I really hope this album will push them in the right direction. I would be ecstatic to hear them produce some godly late-career masterpiece like Voivod has done.