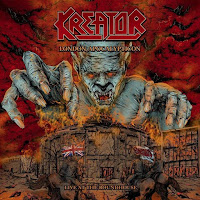 Kreator went quite some time without releasing any substantial live albums, fairly deep into their career, having already established themselves as one of the 'Big Three' of German thrash, while their two major neighbors had released Mortal Way of Live and Live Without Sense fairly early on. However, in the 21st century Mille and company have been quite active putting out such releases, from the more 'official' stuff like 2003's Live Kreation to a whole slew of limited edition, shorter live efforts that were often included with various metal magazines as exclusives. Where it counts, though, on their major live releases, like this one, they put quite a lot into the production and performance and it pays off once again with a high quality recording that spans a wide swath of their career.

This one is out in a bunch of formats, from the basic CD or download to double vinyls, multiple CD or vinyl and Blu Ray combos, the works, so Nuclear Blast is making a pretty big push for it. It's from a late 2018 performance in England, and it sounds really good, with 17 tracks ranging from classics like "Pleasure to Kill", "Flag of Hate" and "People of the Lie" to fare that was recent at the time for Gods of Violence touring, like "Satan is Real" or "Hail to the Hordes". Of course with such a massive range of albums to choose from as Kreator has, they're going to miss a few things here or there, with some phases neglected entirely and others over-represented, but I'd say the selection of songs here is very much killer assuming you're an older fan who has continued to follow and enjoy their material. It's also cool that you get to hear more of the intricate, melodic recent fare mixed in with the more primitive 80s thrashers from their first few releases, and it doesn't actually sound all that bad by contrast, they can build a cohesive live experience from all of this without it seeming lopsided or like they're pandering to any one component of their audience.

The drums sound loud and almost machine-like in precision, where the guitars have a satisfying crunch to them that thankfully doesn't drown out the more melodic lead-work. I'd say if there was a weaker point, maybe the bass lines don't quite thrum along potently enough to make a difference, and you'll notice, as he ages, the more flaws and imperfections in Petrozza's delivery. That's not always a bad thing, though, because he retains that barking torment he pioneered back on the older releases, but you can tell the guy doesn't always spit out everything in the exact pitch you might remember it, and sometimes seems as if he's got an amphibian caught in his throat or goes a little too atonal with particular lines, or that he's running out of breath. Still, for all that, he'll actually bark out a few more sustained snarls and shouts on some tunes that prove he's still got a lot of energy, and there is some stage banter included here which really helps stoke up the audience.

It's better to experience with the Blu Ray on than without, since they carry that one off pretty well and you'll get the kinetic elements of the performance, like background screens, pyrotechnics and audience banging heads that help smooth over some of the little quirks you'd notice in the audio only. All told, London Apocalypticon is no joke, possibly the best Kreator live stuff put to disc, and while I would personally prefer hearing more stuff (or any stuff) from albums like Coma of Souls, Terrible Certainty and Extreme Aggression, I can't really fault their choices, it pretty much all sounds good. Will this be the live album that is held up through history like Destruction or Sodom's classics that I mentioned above? Time will tell, but although Live Kreation has a fraction more vitality to the performance, I think this is a damn solid offering for fans who still support commercial live releases.