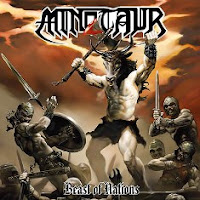 Although it might not be the most interesting stuff musically, I think this Beast of Nations CD EP and 12" is probably the best produced stuff Minotaur has put out to date. Their 2009 album certainly did what it could to remain loyal to the Power of Darkness era while delivering the band into the new century, and this ones goes a little further with a nice even mix to the guitars and vocals, which gives Andi's vocals a much more focused, splatter-thrash effect to them. It certainly seems nowhere near as sloppy as the EP they put out back in the 90s, and all four of the tracks here play out with a genuine 80s riffing schematic that is probably more than acceptable to fans of no-nonsense, nasty fucking thrash metal.

Unfortunately, now your up against the wall of the fact that there are already thousands of bands having done this by this point, and while Minotaur definitely holds claim to having been around near the dawn of the medium, they're not really writing songs that reach the level of either their more famous German countrymen or the many younger bands that have done an excellent job at crafting fiery, hellish black/thrash or death/thrash that feels just as virile as the stuff did when it was first pressed to record in the 80s. The riffs and even the vocals on this EP sound like an also-ran with elements of Sodom, Destruction, and Kreator in them, which is not a bad thing if you're into all of those like I am, but at an age when time can be such a precious commodity, there's not much of a chance I'm going to prioritize the material here over the many classics I own from the field, or even upstarts like Antichrist, Vulture, Deathhammer and their ilk who have done such a phenomenal run at making that savage speed/thrash of the Golden Era viable again moving forward.

But, what I will say is that Beast of Nations is not something I put on and really scoff at. As familiar as the riffing patterns are, and the structure of these four tracks, I was never yawning or bored as I listened through them. I think if the band took this production style and level of vocal vitriol, and then sat around writing up some really kickass riffs that glue themselves to your ears, they could probably write a knockout third full-length effort. There is little here that I find substantially subpar when compared to what a lot of the German B and C-team thrashers like Assassin, Vendetta, and Exumer are putting out in their recent configurations, but then again there's little to no innovation beyond what the band was already releasing in the 80s, just a tightening of the reins. Some might lament that the more accessible production here loses some of the character that they had on the Power of Darkness, and perhaps that's true, but I think this EP is a solid adaptation which only falls short in the lack of truly exciting songwriting.