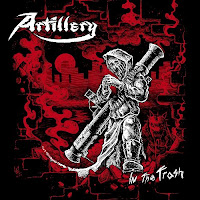 In the Trash is not Artillery's first flirtation with a compilation of their demo and pre-signing material, but it thankfully differs from the 1998 anthology Deadly Relics by including the one full demo that wasn't available there, as well as the Terror Squad demo which was dropped between their first two albums. And I think that's going to be the major draw for anyone who wants to acquire this, the fact that the two collections complement each other, maybe rubbing a few toes together but not planting themselves firmly down on one another's feet. Having said that, the appeal will still find itself limited for anyone who had grown accustomed to or fond of the brand of more elaborate, technical power/thrash that the band had evolved into with the magnum opus By Inheritance, or the later albums which bite from that same fruit but don't quite match the same sweet taste. By that token, this might not even be all that charming for fans into their earlier, more straightforward albums Fear of Tomorrow and Terror Squad, coming before the Stützer brothers had taken on both guitar positions and found that brilliant rhythmic lockstep that would define their sound henceforth.

We Are the Dead is the band's 1982 demo, and moves along at a generally mid-paced gait, brash, chunky and raw, although not terribly produced for such an early tape. It features the band's original vocalist Per Onink, who has an everyman, punkish vibe about him that is occasionally struck with some howls or higher pitched screaming attempts, but much less impressive than his any of his numerous successors through the decades. Still, it's got an honest quality to it that doesn't detract entirely from the listening, and the guitars are so fuzzy, heavy and loud over the pulpy bass lines and slap of the drums that there's a rude, drunken charm to it all, like these guys were recording the demo late at night in a rehearsal space after sharing a 24-pack. Some of these songs like "Mind of No Return" have gotten revisions as recent as The Face of Fear in 2018, and have become a little more functional within the band's overall discography, but I just thought it was amazing evolution to hear them on this material and then pop in the flawless By Inheritance, one of my favorite thrash albums (or albums in general) of all time, and heard how the riffs evolved into something really original and brazenly melodic from these decidedly humble origins.

On the other hand, some of the other recordings here, from a few years later in 1984, are quite good. "Bitch" has a real thunder about it, slightly less crude than the first demo, with much more aggressive and over the top vocals and superior thrash riffs. The Terror Squad demo is a rehearsal demo for the album, and thus some of the most raw shit on the collection, but you can already hear how the band's riffing had progressed into its forward-momentum excellence, and with Flemming coming in on the vocals its a whole lot more fun, even though I'd probably stick to the Terror Squad full-length itself if given the choice. Overall, I think I dug this one quite a bit more than Deadly Relics, which I simply have never really needed to revisit since writing about it, much preferring just to spin the albums again. I'm not saying this one will fare much better, but I think it flowed a little better, even with slightly less material present. Look, if you ask me about Artillery I'm pointing you straight at the first three albums and not necessarily in that order, the demos amount to nothing when compared with the effort that went into much of the Danes' legacy to date...this is a middling collection or reprints that don't offer even a fraction of the reward, but if you're hardcore about collecting your favorite band, or you're just into the historical curiosity, you could do worse.