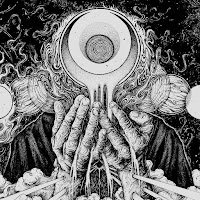 Les Acteurs de l'Ombre must have the market cornered for Euro bands that combine elements of black metal, post-metal and sludge into coherent, unified sounds, and Sons of a Wanted Man is their latest export, a Belgian band which does this seamlessly on their debut full-length Kenoma. In fact, this cross hybridization feels so natural in their hands that I no longer care where one of the genres begins and ends, just that it's all being battered over my head in an emotional, earnest outpouring of snarls, chords, fat bass lines and intense drumming. That's not to say I'm entirely impressed with this record, in fact I was zoning out a number of times due to what I consider excessive song lengths with a lot of predictable patterns, but Kenoma is a respectable package at least.

I can't stress enough how much the element of surprise is important to me when I'm hearing a new record, perhaps not as much in very traditional metal styles, but certainly when I've got a band in a newer medium that gels as well as this one. To that extent, I found a lot of the chord progressions throughout this fairly familiar, though they're heavily saturated with a full bodied distortion, and a ton of searing passion in the rasped, black metallic vocals. Even where the band will just let the guitars trudge along by themselves, like in the depths of the title track, it becomes a little too redundant, expected and patience-draining. That's not to say these choices are bad, but there's just so little to actually snag my ear as I'm passing through. In a lot of cases, the band will shift between these mid-paced, driving chord sections redolent of stuff like Katatonia, and blasted black metal mode, but otherwise the mood of the sequences doesn't really change around so much with the tempos, it's all a wearying gray that, like many shoegaze or blackgaze artists, attempts to compensate with a wall of force in the guitars and beats, and that doesn't always translate into memorable compositions, though it's certainly pleasant and consistent.

Now, occasionally they'll throw something over the top, some slight touch of dissonance created in the churning chords or the melodic shadows cast by the upper strings, and that creates immersion for me, but so many of the bottom end rhythm riffs on this record are just bleak and void of interest, such as the chugging at the heart of "Serpentine", where the same note is beaten to death (fortunately this is one of the shorter pieces). In other times, you'll get just a little bit of the unexpected like the drifty, dreamy vocals in "Canine Devotion", and that definitely helps to flesh out the experience. If you're seeking out something like a Slowdive or Hum balanced against black and sludge, I think you could do far worse than Sons of a Wanted Man. The murky production of the guitars is quite honest and raw, the lyrics have a nice philosophical, pleading style akin to intellectual hardcore, and the cover art and packaging is tremendous. Musically, it's solid, especially if you don't mind some familiarity with the basic building blocks, but I can tell from this that there's plenty of potential territory to grow into in terms of including more off-the-beaten-path melodic riffs or chords, or atmospheric passes that have a little more hypnotic effect that is crucial for this mix.