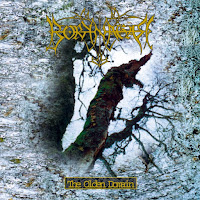 The Olden Domain was the first Borknagar record to hook me, having picked it up alongside its eponymous predecessor at an import record store in nearby New Hampshire. This was a time when the Norse scene had really broken out through signings to labels with larger reach like Century Media/Century Black, and Borknagar had the benefit of riding in on the wave of popularity (or notoriety) that bands like Mayhem, Enslaved, Immortal, Ulver, Burzum, Darkthrone, and Emperor had already achieved even in my remote New England neck of the woods, and albums like this one were pretty much immediately accepted and circulated around my circle of friends that were open to the stuff, with a few early adopters dubbing or sharing it all with everyone else. That's not to even remotely slam this band as an also-ran, because they absolutely had merits to themselves, bringing a fresh perspective very early on in their career to a genre that would blossom with generic clones or more straightforward, less nuanced acts throughout Europe and beyond.

The sophomore is mildly more accessible than the debut thanks to an increased level of Nordic swagger and memorable, folk-flavored riffing patterns that dominated nearly ever track, although it's not a massive stylistic departure from where they had been prior. This still weaves together some of that mid-paced Blood Fire Death thunder with more intricate guitar progressions and a dynamic duality to Garm's vocals as he fairly evenly dispenses his heinous black metal rasping and the more broad, chanted, cleans which help establish the yodel-like presence of his successor. Rygg would keep his range lower-to-mid as opposed to Vortex' higher pitch, but there are clearly similarities in how they'd both express that raw, half-formed style which not a lot of other bands were doing much at the time. Even the keyboardist Ivar's mainstay Enslaved were leaning heavily on the snarls at this point, but in the future many groups of this scene (Solefald, Ihsahn, to name a few) would adopt the mix of 'beauty and the beast' vocal, only as opposed to the Gothic/death metal of the era, the beauties here bore wool sweaters beneath their leather and denim jackets, and lots more facial hair. There are a few points where Rygg seemingly goes a little off tune, and it can provide a very minor distraction, but overall there's just so much personality and atavistic atmosphere that it was love at first listen.

There's also a slightly more progressive/folk tendency being fostered beyond the obvious traces we had with the s/t, this can be heard heavily in the instrumental "Om hundrede aar et alting glemt" which begins as this beautiful piano piece with scintillating effects and striking chords that inevitably transform into more obvious electronics, which might have a lot to do with Ivar's influences but end up crafting potentially the band's most memorable instrumental. The whole first half of this album is stacked with brilliant tracks, winding and wintry and effectively catapulting the listener into the snowy dreamscapes of old that must have shaped the musicians' imaginations. Whether the band is throttling the double bass and black metal snarls in the verses of "The Eye of Oden" or opening each of the tracks to its more expressive, expansive, somber melody and instrumentation, the first 20 or so minutes of material here stands alongside anything else they've ever recorded, it's just that brilliant in its conception and execution. Detailed enough that it has provided me countless listens with a new note or beat to experience each time, but also fairly accessible as far as the more limited Viking metal pool that existed in the 90s before being appropriated by a lot of bands that would hone in only on its more superficial aspects.

"To Mount and Rove", despite having an awesome title, is where the album dips a little in quality, with the almost Dani Filth-like whispery vocals in the verse, and a structure that just doesn't inspire as much as those before it. It rights itself with the more aggressive "Grimland Domain" and stays the course there, and I especially love "The Dawn of the End" with its weird filtered vocals. But I wouldn't present The Olden Domain as 100% flawless; a trim down from its 44 minute playlength to around 40 minutes would have really tightened it up. That said, this is still an excellent effort after over 20 years, holding up as innovative and fresh today as when I heard it in my 20-somethings, and probably in my top 3-4 of Borknagar's outings overall. Considering the level of relative quality they've been able to maintain, even through the notable lineup changes, that's saying something. And I can understand how some purists wanting every album to sound like De Mysteriis Dom Sathanas, Transylvanian Hunger and In the Nightside Eclipse might find this one a little tacky, but everyone gets to be wrong sometimes. This is for me a dreamy, stream-gazing sort of record where each little riff is a rivulet that runs floating leaves off on another course as the snow overtakes the autumn canvas. Not a deep freeze, but a late Fall, early Winter work of majesty.