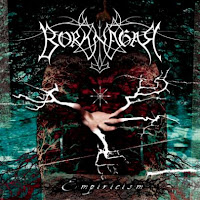 The replacement of ICS Vortex with Sweden's Vintersorg on the vocals was one that took some time getting used to, as I've long been a fan of the latter's musical ability and composition style far more than his vocals. Frankly I thought his alma mater Otyg was quite weak in that department, but he started to hit his stride with his solo records, and the philosophical, progressive folksy bent of his lyrics and songwriting does seem like a natural fit for what the Norsemen had been developing. Already a seasoned presence by the time Empiricism came about, Hedlund shows up here and does his job quite fluently, with an even distribution of his passable black metal rasp and his mid-ranged crooning. So while I immediately missed Vortex's higher pitched caterwauling style that I so adored on The Archaic Course, Vintersorg definitely contributes a lot to making this fifth album work, and instantly dissolving any apprehension of how he'd work within the group.

In fact, this is an album that not only continues to cultivate the ideas of Brun and company from the 90s, but you could also see it as an evolution on the Vintersorg solo path, a followup to the previous year's Cosmic Genesis just as much as it honors Quintessence or The Olden Domain. His own folk black metal style would be heavily permeated with progressive sounds and influences on efforts like Visions from the Spiral Generator and The Focusing Blur, and while Empiricsm is a little heavier, flowery and dramatic than those, they certainly share some roots. This album fosters some of the faster moments of Quintessence, but integrates a lot more dynamic range, with a wide array of instrumentation thanks to the lush synthesizers, Hammond organs, six-string or fretless bass lines, and tasteful acoustics. Few of these things are new to Borknagar, sure, but the way they strike a balance across these 10 tracks and 50 minutes is certainly a slightly different vibe than what I got on the records preceding it. With a crisp production, intricate musicianship, lots happening, never a second that betrays their origins, it's just another feather in the cap of one of Norway's finest, maybe not the plume I'd admire the most upon first glance, but a robust and well-crafted experience that holds up today like so many of their other works.

In fact, it's just another album they've written that I continue to grow fonder every time I revisit it. Extremely consistent across it's entire duration, I wouldn't say they take many risks, but it features another of their better instrumentals, or 'mostly'-instrumentals, "Matter and Motion", with its superb, brooding piano lines that only escalate once the percussion and electric guitar chords arrive. There are some swaggering, potent mid-paced cuts like "The Stellar Dome" in which Vintersorg really has to flex himself over numerous vocal tracks that show some of his better work at that mid-to-slightly-higher range that he finds himself so comfortable in. And then there are plenty of surging pieces like "The Genuine Pulse" or "Four Element Synchronicity" which should sate those that appreciated the fiercer material on the s/t or Quintessence, and even these themselves feature a microcosmos of textures and tempos. The lyrics are very tight, parades of eloquent grammar residing in philosophical and natural subjects; perhaps a bridge too far on the dorky side if you're expecting more Viking or Satanic-themes with your black metal, but for those of us who like to sniff our own fumes as we wax poetic pretentious on the underlying truths of the universe, they are pretty intoxicating.