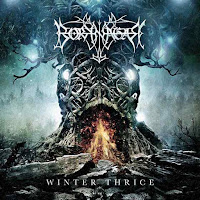 Some people love the Three Tenors, some love their G3 guitar god tours, but I've got my Winter Thrice, an album that teams up all three of Borknagar's 'lead' singers to great success, thanks to some real teamwork and excellent songwriting. Now I admit, I've already made a bit of an exaggeration since 'Fiery G.' only appears on a couple of the tunes, but let's just combine his presence with Lars Nedland's added vocals and count them as one person. What's even more, like Urd before it, Winter Thrice feels like the band had a new lease on its existence, the compositions here are compelling, fresh, and apart from their stylistic parallels, didn't feel like any sort of senseless or lazy rehash of anything that had come before. A lot of that is the vocal interplay between Vintersorg and ICS Vortex, which was already well managed on the previous album, but seems to have matured here with a better balance between all the snarling black metal vocals, chants, choirs and Vortex' clean, almost yodel-like presence which had long been one of their most distinct characteristics.

But for all that, they also manage to squeeze in 'Fiery G.', Kristoffer 'Garm' Rygg back into the fold with the amazing title track and "Terminus", later on in the playlist. For a band that already had so much going on, so many weapons to skewer you with, this is just added detail that makes them so consistently engaging. You could very easily fuck up something like this with too many cooks in the kitchen and make the album sound like a crowded mess, but Brun is such a great writer that the album never suffers from any sort of excess, the structure of every moment is divine. I've already mentioned the title track which was instantly catapulted into my top handful of Borknagar tracks, not only for the trio of singers but also because of those Viking-like swaggering riffs colliding into the proggier parts with the amazingly memorable clean vocals. I hear this song every time I dream, from the melodies to the grounded brickwork laid out by Baard Kolstad, on loan from Leprous, who does a killer job here taking over for David Kincade, even if just for this one studio effort. Other highlights include "Cold Runs the River" with its desperate, surging rhythm and swells of heavenly orchestration, or "The Rhyme of the Mountain", one of their best career openers, or the nerding out of the proggy "Panorama", or the mellow but no-less-potent "Noctilucent".

I wouldn't say the album is entirely perfect, for all the masterful tunes here there are certainly a few moments where the music doesn't catch the ear quite so spiritually. Granted, this is a matter of measures or riffs, never whole tunes, and there is no sub-par material whatsoever that I feel like skipping, but I didn't think the album was incessantly genius, mostly just Urd-level with a few tracks going above and beyond anything on that one. Production is very polished and even, whether they're storming off into a blast beat with Vintersorg's rasp leading the way, an acoustic segue, or a more choppy progressive bit, and the lyrics are some of their finest, conjuring up these cyclopean and sweeping images of nature and philosophical whimsy. I can recall listening the fuck out of this thing when it first showed up early in 2016, and then for several late Autumns since then it provided me with an awesome soundtrack to some of my landscaping, whether it was bagging leaves or clearing snow. Just one of that albums that sounds even better outside than it does when you're experience it in a closed off environment. Expansive, mesmerizing and proof there was still a LOT of life left in this almost infallible Norwegian act. Tied with The Olden Domain for my third favorite Borknagar.