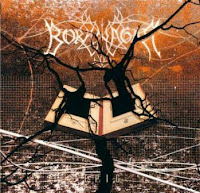 I admit that I struggled to remember much of Epic before going back into it, or at least any 'highlights' of the album that have stood up to me against the greatness of so much in their discography. I can't say that Borknagar has ever released a bad album, but there are certainly some phases of their career I find more memorable than others, i.e. the first three albums or the two newest efforts Winter Thrice and True North with Vortex back in the fold. The solely Vintersorg-fronted material is not my favorite, but all of them are rewarding enough to listen through as I'm finding once again with an album I personally underrated for whatever goddamn reason that it just didn't sink in with me much at the time I first picked up the CD over at the local Bull Moose Music chapter.

Part of that was probably that it blends in rather well with Empiricism. The production on Epic is more prominent, as its title might imply, and the black metal vocals slightly more visceral, but the arsenal is much the same, proggy-infused melodic black metal that shifts between thundering blast sequences, frolicking mid-paced passages where the vocals shine, and folksy segues. Hedlund does continue to warm up and improve his vocal style here through multi-tracking, and delivering some more solid lines in the upper range of his comfort zone. As much as I wasn't feeling some of his singing on older albums of his career, it's absolutely certain that he brought his A-game with this new Borknagar venture, it remains some of his best work and helped spur continual growth through his other projects, particular his eponymous solo records which are generally quite good. Some of the rasping stuff can get a little bold or silly sounding in spots, but his cleaner vocal arrangements sound really good on tracks like "Traveller", or even where he's largely using them as backups for the snarls in "Resonance", etc. I think the band had also gotten a little better at making the symphonic sweeps sound more organic and natural within the tunes.

The group had whittled down to a four-piece here, with everyone handling multiple duties and really offering a showcase reel of their talents. I don't know that Asgeir Mickelson is as good a bass player as he is a drummer, and thus that instrument isn't quite as effective as it was on prior Borknagar albums, but he's got his moments, and even offers a little lead guitar. Lars Nedland continues to refine the progressive and orchestral aspects of the group's sound that were originally introduced by Ivar of Enslaved on the first few albums, and the acoustic pianos and guitars all over the album sound great. There's definitely a lot of shared songwriting duties which might make the album feel a little more chopped up than its predecessor, but everything still flows quite well together, and passionate tracks like "Cyclus" or "Sealed Chamber of Electricity" really floored me like they never had before. I think sometimes a group of this quality and consistency has a tendency to overwhelm me with what it offers, so I'm grateful that the style and production on this album holds up so well, that I can listen back on it over decades and continually discover what I'd been missing. It's still one of my least favorite efforts in their discography, but when the lower tier is still this good, who's complaining?