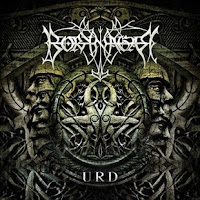 The reintroduction of ICS Vortex into the Borknagar lineup was a truly momentous occasion; although I can understand the draw towards playing in a major act like Dimmu Borgir, and they made what they could of their time with him, I always felt like he was underused. Considering that I enjoyed The Archaic Course more than anything that other group ever released, you could understand my palpable disappointment, and it was so great for him to return to where he rightly belonged, and to instantly play such a major role again shows a lot of class on the part of Vintersorg in particular. Not to marginalize his own presence on this album, because the two actually work wonders together, and Hedlund still contributes most of the harsh vocals and a lot of the cleans, while Lars Nedland also serves as a third vocalist in addition to his keyboard duties.

In fact, Urd is almost like a warm up to the greatness that would follow it in 2016, but in of itself it is quite an excellent album that felt considerably fresher than Universal or Epic before it. While the baseline mash of progressive, folk and Viking black metal aesthetics remained fully intact, there were a number of riffs and arrangements throughout the entire record that felt unique to me. The album doesn't seem to lean as much on the organs or synthesizers as prior outings; although they're still woven in rather well, this record heavily favors the guitars and vocals, and arguably might be the most black metal infused offering the band had released since Quintessence. Not to the exclusion of the other styles, for there are flowing, orchestrated acoustics on the calming of "The Plains of Memories", or majestic melodic folk metal on "Frostrite", it's still a heavily dynamic, diverse effort. But it does feel like you're getting a lot more floods of tremolo picked guitars, David Kinkade laying out a ton of meticulous blast beats, and the way it opens with "Epochalypse" just goes for the throat immediately with some intensity while showcasing this new multi-vocal attack and some a few really sweet riffing progressions.

Whole album is a beast, in particular the vocals, which are fairly even distributed between Vortex' cutting, higher pitch which had matured by this point over his earlier years with the band, the rasps and mid-range cleans of Vintersorg which had also improved, and Nedland's additional lines. Once in awhile they'll have this choir-like track just hovering off in the mix which sounds amazing to the point where I wish it was used even more...there is always something happening here and I'd have to brand it as one of the finer vocal albums over their whole career, trumped only by its own followup. The mix of the album is clear, but textured and powerful, like a lot of their material I feel like they just have so much more weaponry than other bands in their field, and none of it drags behind any of the other instrumentation. Combined with the great lyrics, the packaging, and the overall vision this is one of the band's top albums, although really, there are so many to choose from...my opinion of this one has even INCREASED over the last eight years since I picked it up, but it's clearly a shower just as much as a grower, more evidence that this is just one of the best bands around.