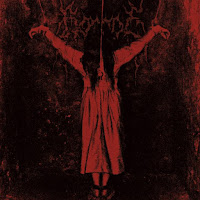 There aren't many metal musicians quite so prolific as Bornyhake, and what's more, despite being active in, or the full creative force behind about a dozen plus acts at a time, many of them are held to a reasonable level of nuance and quality. Borgne has always been one of his main projects, and in my estimation the most interesting of them, almost mirroring his countrymen Darkspace in the older albums that were given minimalist Roman numeral titles and songs that were enumerated rather than given titles, a choice that often challenges the listener to really dive deep into the audio aesthetics since no obvious picture will be painted for him/her beyond a basic cover artwork and cursory genre knowledge. Bornyhake dropped that tactic around his fourth full-length, but not the poignancy of his songwriting, since a lot of albums since that point in 2009 have gotten even better, with standouts including 2010's Entraves de l'âme, its successor, 2012's Royaume des ombres, and, well, this one right here, Y, his ninth album.

The style Borgne plays is dominantly industrial black metal, comparable to Darkspace or certain phases Blut Aus Nord; but not always quite as distant and bleak as the former, or as dissonant and bizarre as the latter. Y is a sensuous flood of programmed electronic drums, consistent patterns of tremolo picked notes, evil chords, and one of the best Swiss rasps we've ever heard. It certainly leans more on the side of pure black metal, with the exception that the backbeat isn't organic, and there are a lot of synthesizers provided for constant atmosphere by the group's second member Lady Kaos. On the whole, it's really quite simple, there are very few spaces on the album that aren't filled with just a thundering assault of rhythm, but then he'll splice in some breakdown parts which have more of a chugging industrial guitar, and drums patterns that seem more acclimated to that genre. Such a shift might seem cheesy or superficial if it weren't so damn serious, it's almost like a more muscular version of countrymen Samael's brilliant Passage album, but doesn't create its own language of sound quite as well as that, instead drawing from the two halves of its influences and merging them together in a memorable distribution and execution. Some tracks feature atmospheric segues before the surging, pounding aggression returns, but on either side of the contrast the album functions well.

I just love the simmering synthesizer lines that burn like some illegal rave held on a dock between giant steel shipping containers. There is certainly a broad, claustrophobic, urban deterioration here channeled through suicidal and drug-addled emotions. There's not a lot of subtlety despite all that's going on, from the occasional, melancholic melodic guitars that spire off into the nightscape in the bridge of "A Hypnotizing Perpetual Movement That Buries Me in Silence" or awesome wails that haunt "Qui serais-je si je ne le tentais pas?" The vocal arrangements are excellent, and he covers all manner of voices between wails, chants, whispers, snarls and growls of various levels that are probably one of the most intricately designed parts of the album. Even where the album goes more for a pure industrial motif as in the 9+ minute instrumental "Paraclesium", full of little electronic impulses, bleeps and bloops, the oppressive nature of the whole record does not permit your escape. And then he pulls off this climactic, 17 minute track "A Voice in the Land of Stars" which never once bores me throughout its surprising levels of climactic majesty delivered through walls of doomy riffing, shrill synthesizers and tinny percussion. Devastatingly effective album, if you've love entrepreneurs of this style like Red Harvest or Dodheimsgard, or the other Swiss bands I mentioned earlier, and somehow haven't heard Borgne, well you've just been given notice.