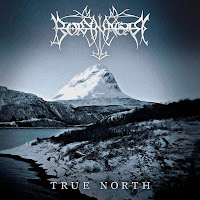 True North is arguably the most 'friendly' or accessible album in the entire Borknagar line to date, and I don't mean that as any sort of criticism, because it's fantastic nonetheless. Memorable, melodic melodrama for all of us would-be woodsman and Viking-alikes the globe over, captured with expert songwriting and performances all around giving well over 100%. It's also one of those albums well into a band's career which seemed to vault a number of fans back up on the bandwagon; at least in my circle of acquaintances, I had to remind numerous friends that Borknagar had already put out two excellent albums leading up to it in Urd and Winter Thrice. But for whatever reason it seems they're finally being appreciated as the Scandinavian savants some of us always held them up to be, and that is absolutely fine. But there's probably also a slice of the audience that finds a bittersweetness to this one...

The Vintersorg years are over. Hedlund had an amicable parting with the band and bounced back over to his eponymous mainstay to produce a (worthy) sequel to his debut Till fjälls decades before, and his absence can certainly be felt here. Not through a dive in quality, but just in how True North does not attempt to come across as busy as some of its predecessors. You don't have the massive vocal arrangements they all pulled off together on the albums running up to this...still some duets, but in general the vocal patterns are more straightforward. Fortunately, they're also AMAZING, with ICS Vortex giving one of the best performances of his entire career, both his epic cleans and his harshes. There was also some new blood in the fold here, with drummer Bjørn Dugstad Rønnow, the third in three albums, and guitarist Jostein Thomassen, aka Pendragon, who had played with Rønnow before, as well as a little late 90s/early 00s black metal outfit you might have encountered called Source of Tide. Both of them fit into Borknagar so well that you'd have thought they were already playing with them for a good decade or so already, and in fact the drumming is quite potent, which gives a lot of life to such a dynamic effort which to my ears sounds like the most modern thing they've ever done from a pure production standpoint.

Now, I'm not going to lie, True North is a bit heavily front-loaded, but damn are these first 4-5 cuts epics that match almost anything the band had produced before. "Thunderous" is quite an accurate description of itself, a powerhouse that isn't without its own acoustic, emotional self-balancing sequences that include some very tasty guest violins. "Up North" might be the most presentable use yet of Vortex's yodeling, melodic cleans, so damn catchy that one weekend when my wife and I were driving the kids through the White Mountains to Santa's Village in New Hampshire, I had all of them trying to yodel along to that part. And they're a bunch of squares! To them, Loki is just a Marvel action figure they have lying in a toy bin with so many others. "The Fire That Burns" is another mighty tune, a more mid-paced joint that makes you feel like you're watching your landscape transform into the Nine Worlds in slow motion, vocally impressive with some great little proggy bits and acoustics. "Wild Father's Hearts" stands out for being a better Borknagar ballad than almost anything you'll find on Origin, some powerful choruses, and when the electric guitars arrive they are brilliant.

After that point, the album shifts down to just regular old 'greatness' and some of the brilliance might subside, if not the magnificence. Tracks like "Into the White" and "Tidal" have some wonderful moments, but they also have a few riffs in there that don't quite stick the landing as well as others, or might feel a little redundant with other Borknagar tracks here or in the past; for instance I heard some callbacks to The Olden Domain in the latter. Nothing wrong with that, but that initial rush in which I couldn't believe what I was hearing faded away and I was left with just a pleasant listen to material which is still far better than most anything else I'd listen to in any genre in 2019. So, not much of a downer and not only a few points get shaved as a result. Altogether, True North just exemplifies the resilience and continual growth of the group, even with these lineup changes they pull together one of their strongest albums, and in fact after listening to this one for the last six months and change I'm happy to say it's my second favorite in their whole catalog, just marginally nudging out its bad ass predecessor.