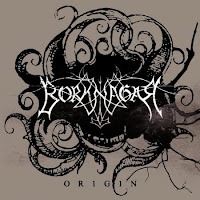 I tend to abhor the 'acoustic album' as a rite of passage, which is unusual since I have no problem with well-written acoustic songs, or the use of the instrument intermixed with heavier music. But for so long there seems to be this impulse which necessitates that most bands have to produce some chilled out acoustic experience which somehow grants them some ephemeral sense of legitimacy. Fuck it, make mine electric! Now, you wouldn't need a trip to the oracle at Delphi to tell you that an acoustic Borknagar album was going to be inevitable, the band is simply too rooted in its folk influences to ignore the possibility, especially having settled in with Vintersorg, who is also a proponent of the style with some of his other projects.

To their credit, Borknagar did not just phone in a predictable 'unplugged' album of previous released material, at least not for the most part. "Oceans Rise" is a new version of the track off of The Archaic Course, and not terribly welcome on my part, not just because its acoustic, but because I just don't enjoy Vintersorg's voice as much as Vortex's snarls or cleans on the original. To that effect, I have never really been able to get much into Origin. I can appreciate the subtle nature of this transition, and the wonderful production that delivers each light beat and shining string with such clarity. The vocals and backing vocals are mixed very well, balanced between delicate verses and powerful choruses that emphasize Hedlund's strengths. Most of the original compositions for this are quite nice, and probably would serve well to give the band a breather at a live performance, but I only find a few of the riffs memorable in this acoustic context, and I sense that the same things delivered with electric guitars and heavier drumming would probably sound stronger.

"White" is an exception, because I liked the creeping progressive nature of its structure and it has one of my favorite vocal performances from Vintersorg ever in this band, and "The Human Nature" is another excellent example of where it all works due to the vocal arrangements. It's also not just some bare-boned exhibition of acoustic guitars and drums, there are also violins, flutes, cellos, and fretless bass all over the place to really flesh out this sound. In fact, I think for fans of pure folk music, this one might have some staying power. If you just like sitting by the bay, or around the campfire, as the birds dart about, the clouds ramble on through their adventures, nursing wine or mead, just desiring the simplicity and warmth that this medium of music can provide, with the band's introspective form of lyrics that examine the self's place in the natural world, this is certainly successful. This if Viking Hippy 101, but in terms of memorable construction it just doesn't always achieve what the band has long been able to while plugged in. To some degree it's a bit of a sedative, I feel like falling asleep several times through the experience, not necessarily a bad thing but not what I'm after. And the two instrumental tracks here are by far the most dull, thankfully brief.

Granted, this is a sort of one-off 'experiment' and might not be considered a true Borknagar album, but it's clear that some effort went into this with a lot of new songs, so I can't exactly isolate it as some non-canon stepchild. Thus, it's my single least favorite in their actual studio discography, but that's not to say it isn't decent for what it is and that some fraction of the band's audience is bound to fall in love with it. I just find too much of it to be samey and lack the dynamics of their metal work.