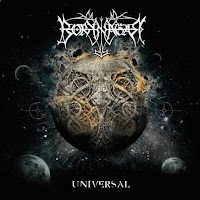 The sole Borknagar album not to appear on Century Media Records, they kept it in the family by putting this one out through the esteemed Indie Recordings, a label that has long served as both a harbor for veteran Norwegian bands and upcoming progressive acts in the black metal realm and beyond. But don't take this as any sign of mutation or perceived artistic freedom, Universal is does not far from the tree of its predecessors, to the point that I often get it confused with its 'heavy' predecessor Epic, ignoring the acoustic album that fell between them. Well into the Vintersorg era of the band, it doesn't distinguish itself much from albums before it, but just offers another marginal round of refinements and the same level of intricate, competent craftsmanship that had defined them.

Universal does suffer somewhat from redundancy, for as much work as they obviously put into their material, a number of the tracks present here flow into one another and previously released tunes to the point that they can be a little difficult to pick apart. There's still a strong backbone of melodic black metal, but constantly being complemented with acoustic segues, Hammond organs, synths and pianos so that there's rarely a moment of raw riff that isn't accompanied. The 'Viking' sound here is quite prevalent through Brun's chord constructions and that interplay of electrics and acoustics that feels like you're drifting along the winds and waters of some far North idyll, interwoven with the substantial vocal arrangements of Vintersorg and Lars Nedland, between raving rasps and some slick male choirs which help elevate it that much more above the mundane. The proggy keyboards are legion, and Borknagar had long since become one of the bands outside Finland's Amorphis to best incorporate them without coming off as overly atmospheric hacks.

Sprinkle on some bluesy, Pink Floyd-style lead guitars and you've got yourself another rich, detailed album you can adventure through numerous times with plenty of new patterns forming. The new drummer at the time, American David Kinkade added quite a lot to the aural canvas with his beats that effortlessly bounced between intensity and calmer rock grooves and fills, and there were a few moments where Tyr's bass playing also got pretty perky. For me this album really picks up with the trilogy of tracks "For a Thousand Years to Come", "Abrasion Tide" and "Fleshflower" which are the most exciting and interesting of the lot, some excellent vocal lines, jarring proggy guitars and boiling organs and other synthesizer lines frenzying out to kick some life into the occasionally bland tunes that came before them. And for a wonderful surprise you get a guest spot from none other than former (and future) vocalist I.C.S. Vortex on "My Domain" which is a great way to close this out and perhaps offer a little foreshadowing.

The digipak version I own comes with a bonus "Making of" DVD which is pretty typical of such things, and not all that interesting to where it offers me much more value. You get a good glimpse of their process and their wintry environments where the album is being recorded, but I'd have loved more of an intimate thing where someone could pick their brains a little more, maybe see them out about town in the midst of the hole thing. Unless you want to sit there watching guys record their instruments individually for songs that you know far better and like better on the whole, it's kind of a dud and not even shot particularly well, but then again it's not like they HAD to include it, they wanted to kick a little something extra to the audience and so be it. Not a mar upon an album that, while far from their best, still has plenty to recommend about it and for me trumps both Origin and Epic before it.