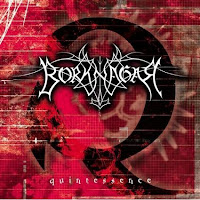 I always got a sense with Quintessence that Borknagar wanted more of a 'sure thing' alongside their Norwegian peers after the somewhat mixed reactions to The Archaic Course, and to an extent this seemed to me possibly a bit of damage control. At the very least it's a curve back towards some of the sounds we were hearing on the first two records, but with more pronounced snarls and orchestration that were comparable to the material being produced through popular acts like Cradle of Filth and Dimmu Borgir at the time. Being that this is Borknagar, of course, we're still getting a lot of the eclectic instrumentation and philosophical sheen they were already known for, multiple vocal styles being arranged throughout and lots of dynamic, progressive shifts that can be felt through Brun's note patterns and the heavily embedded synthesizers that ranged from organs over to more ambient and electronica-tinged pads.

After having such a prominent role on the album before it, ICS Vortex seems to be subdued here, at least his cleaner vocal style. It exists throughout the album, but is too often paired up with the rasp vocals which often end up sounding pretty silly. In fact, there are a lot of synth parts or melodies here that give the impression of a carnival or haunted house, not enough that for it to avoid the fjords of the band's foundation, but I occasionally feel like I'm listening to a more intense, hectic Arcturus and not so much Borknagar. There are still some great, charging Viking pieces here like "Ruins of the Future", which has some amazing melodies, especially the interchange between the synths and guitars. They also throw this filter on the snarls which is horrifying if over the top. "Colossus" is another track I enjoyed, one of the closest callbacks to the previous records, with a nice clean vocal presence and some swinging, swaggering mid-pace riffs. "Invincible" sounds like some badass carousel black metal, and the close "Revolt" has a nice contrast between its own circus-like synths simmering off in the background between the charge of the beat and the rasping.

Otherwise, I think there are a few misfire tracks with some interesting tectonic rhythmic structures that simply don't manifest riffs of high enough quality for them to stand out. The instrumental ditties are a mixed bag, with the prog-goth organ & drum driven "Inner Landscape" sounding like it belongs on La Masquerade Infernale, and "Embers" giving off a "Planet Caravan" like vibe as it leads into the last track. The mix on the album is pretty solid, but I think perhaps some places there are certain instruments or vocals that should have been emphasized or dialed back. This was Lars Nedland's first album with the band, and I think they also overused his keys, just a fraction. I'm a HUGE fan of his, don't mistake me, in both this band and his mainstay Solefald; there are plenty of moments where he shines even here, but the album does come off a bit overcrowded or messy in certain spots. Ultimately, Quintessence is my least favorite of Borknagar's studio efforts apart from the acoustic Origin, but it's still pretty good. There's an EP worth of fantastic material here, and nothing else is necessarily bad, it just doesn't resonate with me as much as the first three albums or many that have arrived later on.