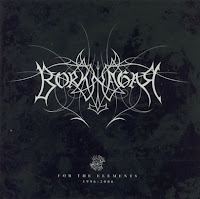 For the Elements is another of those pretty senseless and shady compilations of previously released material which arrived at a peculiar time when Borknagar was between Century Media signings. The album directly after this came out through Indie Recordings, so one has to wonder if the label might have just been trying to squeeze out a little more profit from the original signing and not have any foreknowledge that the band would eventually return to the roster. Sure, they're a business, they own the material and have the right to do what they want with it, but one can only imagine what a nicer fan package might have included if there were odds and ends around to fill it. I know the band never really had much by way of demos before their signing, but perhaps there were a few rare tracks lying around that could have filled this one out? Or live recordings?

We all know how I feel about these shenanigans, and I can't promise my crusade ends here, but there are two slight things working in this particular compilation's favor. For one, they've remastered the material so it sounds a little more balanced from the slightly rougher years of the s/t or The Olden Domain and the more pristine, glistening production found on records like Epic or Origin. This was also curated by Marco Barbieri, one of the early driving forces at Century Media, and a guy I happen to admire a lot. In fact, his writings in Ill Literature were some of my own inspiration to deciding to review the metal music that I so long admired. So if someone is being handed a catalog of tunes to pick through, I sort of trust that he'd put their present some of their best. And he does well enough, it's not as if the Norwegians had any bad material to begin with, and thanks to its chronological presentation, the acoustic tracks from Origin are wedged at the back of the order, and even there they included that album's best track "White". 15 tracks overall, with 2-3 taken from each of the albums put out by that point under the Century Media banner. The exception is the s/t, of which only the excellent track "Dauden" is present...a misfire, I probably would have dropped one of the Empiricism tunes and added "Grimskalle trell" or "Krigsttev".

Of course, nitpicking details like track inclusion is a complete waste of time, just like this release is. Borknagar is an exceptional band that should be experienced through its full-length albums, and even though a few tunes here might be glossed up or polished, and decently I might add, it's just so critical to explore the context of all the band was creating at each of these incremental stepping stones in its career. There is no bonus material of note and it doesn't even look all that great in presentation. Not to mention, some of those earlier records have full remasters available out there through various labels, so one of the benefits this might have had in 2008 was quickly erased by subsequent products that are much more deserving of your hard earn coin (or even your trust funds if you're so fortunate). If you're brand new to the band, just head immediately towards True North, or Winter Thrice, or honestly any other studio album other than Origin and spin them front to back. You won't be disappointed. Save this change for a coffee and sandwich.