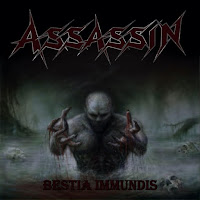 Not that this is the first cover art hiccup from Germany's Assassin, if you'll recall Interstellar Experience or The Club, but you'd think after over 30 years you really want to present your music in the best way possible. While I've got no problem with evil creatures rising from the muck, this image and the title font leave a lot to desire. In fact, the band seems to look its best when represented by futuristic tanks circa something like Battlezone, so I say adopt those metallic monsters of a forgotten future as your mascot and just roll with 'em. That said, when we're going beyond the surface level, I've never been the biggest follower of the group. Their debut The Upcoming Terror was a good B-list record in the 80s German thrash wave, the two albums after that grew increasingly worse, and then when they tightened things up a little to produce two solid if uneventful efforts in Breaking the Silence (2011) and Combat Cathedral (2016), which showed some consistency and dedication to their early style.

Bestia Immundis sounds better than it looks, a burst of traditional thrash metal which once again stays faithful to the notion that it might have been written several decades back. What this reminded me of most is Sodom, Persecution Mania through Tapping the Vein, with the nasty faster paced guitars always bordering on death/thrash, simple rhythmic patterns that you've heard before, but sound pretty heavy and sincere in these guys' paws. They don't produce a lot of riffs that leap out form the bloody, bruising canvas, but as permutations of those old albums by their countrymen, they sound just too savage to scoff at. The leads are wiry little interjections, bluesy and melodic and produced to stand out from the writhing momentum of the rhythm guitars. Unlike Sodom, the bass got a little lost in the murk for me, but the drums are barbaric and really feel like you've hit a brick wall. The vocals are similar to the last album, and the second effort with this new singer Ingo, as Robert parted with the band after Breaking the Silence. He's got a pretty decent thrash snarl, especially with the nasty sustain on it, but they also use some death gutturals in the mix, reminiscent of how Testament used those on their albums like Low and Demonic, only the throat here is nowhere near Chuck Billy level.

There also some snappy gangbanger chorus parts in tracks like "How Much Can I Take" which are kinda catchy, in fact a lot of chorus parts go for this with varying success. I think one of the biggest letdowns here is that occasionally they'll just erupt into this ripper of a track, like "Hell's Work is Done" or the insane "Shark Attack", but apart from the vocals, some of the surrounding tunes just don't seem as strong, and they just don't have the sorts of riffs that are appeal to the ears for long as the origins did back in the 80s. But, really, that would be too tall of an order, and I give Assassin credit for still sounding coherent, unforgiving and heavy, even though there wasn't much here to continuously draw me back to the album more than a few times prepping this review. I still think The Upcoming Terror is the good starting point and remains their most prominent effort, but Bestia Immundis is nearly on par with Breaking the Silence, and if you're tracking down some German thrash and don't want the usual suspects, these guys are roughly on the level of peers like Exumer, Darkness and Necronomicon; competent and neckbreaking, if unexceptional thrash.