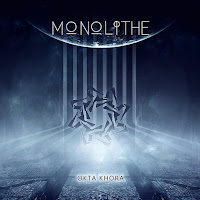 As with some of their prior experiments, French doom majesties Monolithe like to meddle with the uniform math of their song constructs here. There are eight tracks on the CD, all at 4 or 8 minutes in length, although once you join the "Otra Khora" and "Ignite the Heavens" two-parters, all of them are 8 minutes. One has to admire the nerve these guys have in trying to make this all work...does it end up that some tunes are needlessly repetitive, and others cut off before their time? Or are they just so damn skilled as songwriters that they can effortlessly pull this off? I actually feel that the gimmick doesn't always work the best here, with some of the cuts not ending all that wonderfully, the set times a constraint, but it's a small mar on what is otherwise a magnificent record.

This is one dramatic, unique band which perfectly melds the power of melodic guttural-driven doom with more graceful, airy passages that often consistent of cleaner guitars plucking along as they ebb and flow forth from the more distorted chord passages and endlessly beautiful multi-tier harmonies, some of which are more traditional for metal but others almost serve like an ambient, cloudy layer that hovers above it all. There are a few freeform, jazzy influences wrought through the saxophone, but the whole record feels like these repeated rays of lights piercing a foggy, hazy firmament, like a more metallic parallel to some of Pink Floyd's mellow, atmospheric 80s material. There's a near constant sense of elevation through some of the tunes, like "Ignite the Heavens (Part 1)", where it gives the listener the impression he or she has escaped gravity and is floating upwards, floor by floor parallel to some high rise building. It's a bit spotty and messy, especially how the transitions are clipped between certain tracks, but when you're actually embraced in the midst of one of this band's songs there is simply no denying the dazzling array they cast between fits of hope and melancholy.

I'm not a big proponent for all the cleaner vocals, they can get a little warbly or awkward, but they're thankfully not legion throughout this, and the death growl is perfectly placed to add some ballast to the lighter material. Tracks like "The Great Debate" are, well, monolithic, steady and weighted just right to keep the listener engaged even if they move almost entirely at the same pace. There's always some new hint of light, melody or eeriness about any corner of the compositions, a stray melodic note you didn't pick up, a shimmering, radiant atmospheric effect in the backdrop which constantly moves the music in more dimensions than it would have if they used less tracking. It's powerful, poignant, and a record that, like the previous Nebula Septem, which is trying to forge forward in a subgenre that often relies too much on the same old formulas or tricks. There are few if any other groups out there which sound a whole lot like this one, and while there are some stylistic similarities throughout their own discography, each album feels like a statement, an adventure all to itself. Hard to pull off so much character in a catalog that was once dominated by Roman numerated tracks or album titles, but Monolithe succeeds with room to spare.