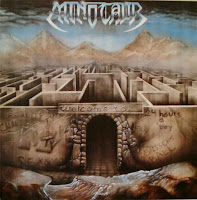 The cover to this EP reminds me so much of what I loved about thrash and heavy metal back in the 80s...vintage fantastical artwork which summons up all manner of possibilities, with a classic logo style that would just look great in any record bin as you're filing your way through obscurities at a record shop. The labyrinth is of course fitting to Minotaur's brand, and I even the graffiti scrawled about the entrance which is a great thrash aesthetic. The almost muted colors as well give it a dusty, antiquated feel, maybe this is some post-apocalyptic maze set up by a nuclear warlord. At any rate, if you noticed I'm spending a lot of time day dreaming over this cover...it's because it is the only real positive to this limited 12" which arrived far too late to matter...

Not that it would have made a difference had this launched in 1985 or 1986, because it's pretty much just a mess of sloppy, un-memorable riffs and raw production aesthetics that don't do it any service, and I'm guessing not by choice. I mean, I'm a card-carrying disciple of the first two Venom albums, and when something is unwashed, under-produced, but comes packaged with great songwriting, then that rawness can either intentionally or ironically prove beneficial, but here it just falls flat. The EP opens up with a half-decent, almost Maiden-esque style of melody with an appropriate Hellenic feel, but then "Multi-Morbidity" just falls right off the rails, a clusterfuck of boring chug riffs, and messy speed metal riffs peppered with Andreas 'Buschi's' barked vocals which are constantly trying to contrast these little screams and wavering evil lines against the harsher monotony. Props to him for trying to give a little personality to his delivery, and occasionally some of his upper register screams are pretty cool, or the unexpected lower pitched death barks, but with nothing catchy or impactful going on around them it's almost like he wandered into this drunken thrash jam session with the tape recorder on.

Few of the other songs are any more coherent..."State of Catatonia" is mildly superior, and "We Hate You" has a Tankard-like thrust to its verse rhythms circa The Morning After, but still feels very uneven, though the production does often remind of the first two Voivod riffs on this one because of the way the speed metal riffs play out. The B-side is slightly better, with "Wish You Were Dead" the best track on the EP, but even the peppy and cheerful "R.A.T." is too abrasive with the flaring guitar tone to really work. The rhythm section is fairly tight throughout the release, with a few points where the bass lines groove along admirably, but they don't really have the best riff set to work around and the entire affair still comes across like a set of songs that needed more development time, reining in the vocals and assembling the guitars into a more memorable structure rather than just feeling like they just rushed it all along, plugging one in after randomly.

I've certainly heard worse stuff in the genre, and there may be a little sliver of appeal to those that love tracking down rugged Teutonic thrash demos, or just want the music to sound sincerely filthy, but this stuff is inferior to their 1988 full-length Power of Darkness, which is itself not top-shelf, but has a more appreciable, nasty character to it. I'd even throw you a recommendation for their 2009 comeback album over this, which runs average-to-decent and doesn't sound as if much had changed for them in the 20 years between. Maybe if you REALLY love The Morning After and just want other things that give off a similar impression, but then this lacks the funny lyrics and certainly the amazing riffs and choruses on that one.