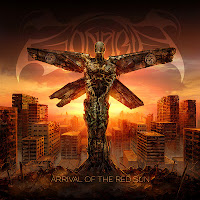 Zonaria's previous albums had established such a futurist, sweeping sense of fulfillment it's a wonder the band hasn't established a wider audience, as bands at this level of production and atmosphere are won to do. Granted, neither Infamy and the Breed or The Cancer Empire had an enormous resonance with me, but both were good albums that took a rare spin on the melodic death metal niche than most of the stock, noodling Dark Tranquillity clones. Dense and dystopian, never afraid to add a subtext of groove or a symphonic ingredient redolent of larger budget, modern black metal acts; I suppose the closest comparison I could make would be fellow Swedes Hypocrisy on their more recent records (1999-2009), only Zonaria's compositions are more complex and more heavily layered.

Arrival of the Red Sun sounds much like it appears, a crushing and pessimistic paean to metropolitan corrosion and nuclear Armageddon that is musically consistent through its 40 minute run time. What I enjoy most about the group is how they slowly, meticulously build some exotic pattern of melody and groove through the rhythm guitars and choir-like synthesizers in a tune like "The Blood That Must Be Paid" or "Desert Storm", almost like a more technical, harried, Middle Eastern military version of modern Amorphis without the clean vocals. Lots of deep, chugging rhythms mix well with the various arpeggios and melodies that haunt the bleak miasma of the album's skyline, and they incorporate death metal squealing and other techniques familiar to the genre with class and precision rather than mindless indulgence. I found that the leads here just screamed out over this rusted rhythmic desolation, tastefully conceived and never seeming frivolous or forgettable.

Drummer Emanuel Isaksson is a monstrosity, a mechanical bull of a drummer who grafts each track with tight blasting and frightening footwork, and he also helps maintain a high level of dynamic variation that keeps the album from stagnating, as in "Full Spectrum Dominance" where you get beats ranging from controlled blast to surgical thrashing under the din of the piano strikes and serpentine guitar riffing. The album is fairly bass-thick as a rule, a lot of low end to contrast against the synthetic orchestration of its stratosphere. If there's one aspect of the music I wasn't fully invested in, it would have to be the vocals, which are a fairly generic, if dense mesh of growling and rasping that once again remind me of Hypocrisy, if louder. They're bold and broad enough to distinguish themselves against the vast musical slaughterscape, but in the bigger picture they don't possess much of an individual character, and considering the simplicity of a lot of the lyrics, and the tendency to drop an overabundant amount of F-bombs, they can often seem trite or distracting.

That said, Arrival of the Red Sun, as a whole, works just about as well as their prior output, and it never wimps out. If you're seeking a sleek, modern sound rife with dissent, plenty of proficiency, and a plethora of sounds feast your ears upon through multiple listens, you've come to the right place. Fans of groups like Stalwart, Hypocrisy, or even the later Emperor (Prometheus) or 21st century Dimmu Borgir records will find a lot to enjoy about this, and it's few flaws are overcome by the sheer effort the Swedes have placed in its audacious architecture.