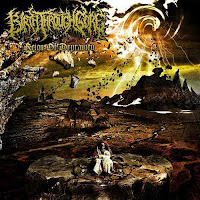 What Birth Through Gore might not claim from its listenership in terms of sticky riffing patterns, subtlety and nuance, it will take from them in sheer force, because Reign of Depravity exits the starting gate like a stampede of mechanical bulls with shoulder-mounted rocket launchers loosing devastation on all their surroundings, and it left this reviewer paralyzed in a smoking crater. The Greeks merge muscular, maniacal riffing patterns with mechanistic beats and voracious, chugging guitar tone as rich as you're like to find elsewhere on the Sevared records roster, and for a debut the production strikes an excellent balance between polish and punishment, one you'd expect from veterans like these who have served their time with various other brutes of the Hellenic underground.

I definitely pick up on a strong Suffocation vibe here, infused with the accelerated oblivion of Hate Eternal in their prime, and perhaps a strain of street level brutality you'd associate with acts like Internal Bleeding. But they launch these concepts into an apocalyptic stratosphere, using blasted passages as the rule and weaving their dynamics upon this foundation of concrete speed and suffering. On a lot of recordings in this vein, a drum machine might prove a distraction, but not once was I taken out of this bruising experience, because the level of percussive precision executed through the beats fits the group's cataclysmic composition style like a surgical glove. They are also mixed really well, potent and constantly pummeling the ears but never detracting from the rhythmic acrobatics of the guitars, which alternate between dense palm muted pistons, ominous lower end Morbid Angel-style octave chords, molten tremolo patterns and even some slightly softer clinical death/thrashing that places the audience straight under the knife.

The vocals are more or less standard for the style, with hints of Vincent, Rutan, maybe a bit of Benton's lower growl for good measure: nothing unique, admittedly, but they are entirely fluid with the percussive nature of the band's songwriting. The bass tends to support the guitar more than stick its nose out, but once more, it's not exactly a fault, because it creates this taut consistency in the music that allows the listener to really focus in on each of his/her bones breaking under the strain. Choosing individual, distinct tracks would do the album a disservice (though I was partial to "Redeeming Faults"), as the Greeks rein this all in at around 29 minutes, so it's easy to fit into your morning commute or a workout session. That said, like many albums of this vein, the songs tend to blend into one another after awhile, and the listener just succumbs to the cyclic beating, because why the fuck else would we be listening to a band called Birth Through Gore?

It probably wouldn't kill the trio to incorporate more freakish variation and striking note progressions to help break up the incessant onslaught. There are points on the album where I could have envisioned some insane breakdown with evil dual harmonies erupting that would have hurtled me completely into oblivion, and I feel like this might be an excellent strategy as they move into the future. But, really, Reign of Depravity delivers precisely what it advertises: a bone splintering exercise in apocryphal violence which honors its influences while keeping current with other European troglodytes who perform in the brutal USDM style. Yeah, you've heard this all before, but that doesn't make it hurt any less when the style is in the hand's of such competent individuals as these, and Birth Through Gore joins other Sevared front-liners like Abnormality and Sepsism as one more good reason to take out life insurance.