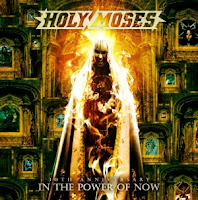 While Sodom celebrates its 30 year anniversary with a boxed set full of various goodies, an official 'bootleg' on multiple formats and a collection of rehashed studio material, another German thrash cult, Holy Moses, has taken a more entertaining route towards paying tribute to itself and its fan base, with a 2 disc, 20 track spread cover the span of its entire three decade career, a pair of new studio tracks offered as a bonus. This is hardly without precedence in the Teutonic scene: Destruction rattled my teeth with its impressive Thrash Anthems compilation in 2007, while others like Tankard and Mekong Delta met with a more limited success despite the dubious contemporary strides in production treated to some pretty fantastic source material.

Thankfully, Sabine Classen and her latest round of musicians have done an absolutely excellent job here, and I have been listening the shit out of this thing for weeks. Any worries I might have had in terms of respect for the original songs were quickly abolished when I experienced the dense, puerile energy the band have affixed to the earlier incarnations. I've never had much of a problem, with, say, the mix of Finished With the Dogs, by far my favorite of Holy Moses' studio full-lengths even after the intermittent decades, but even those choices shine on this collection. The band has always had a very percussive undercurrent to its style, the riff patterns somewhat simpler than fellows like Destruction or Kreator, but loaded with intense palm muted picking on the lower frets and a rush of sheer, volatile momentum steering the songs more than a delve into the more adventurous, progressive leanings of many of their countrymen in the 80s. The re-recording does not seek to alter that aesthetic, only envelop it in a more pudgy, punching tone and then deliver it straight to the listener's face, to the point where even some of the more mediocre choices among the track list sound better!

As for Sabine herself, she sounds just as violent and raucous as she did 20 years ago, consistent with the group's more recent recordings in that she infuses a margin more of a death metal presence into the thrash rooted patterns of barbaric inflection. Long one of the best female forces in thrash, she does not shy away from aggression, and this Holy Moses in no way sounds like a washed up band waxing nostalgic, even if that's precisely what they are doing here. The guitar tone is forceful, functional, and gut rupturing with just the proper dose of clinical complexity to escalate it beyond garden variety bar thrash, the drums mix quite sincere, the bass bulbous and compact. One could mosh his/her brains out to the majority of these 80 minutes, but it's hardly minimal or unformed material, the riffs are in general decent to good and the process of re-recording has shuffled the varied chronological phases of the group into a unified whole.

Some might scoff at the omission of certain favorites like "Current of Death", but really, that song is already perfection as it stands, and I'm quite impressed that the band chose to leave it off, as if to say 'we are not touching that'. Otherwise, you get a reasonable selection from MOST of the Holy Moses backlog. Debut Queen of Siam seems strangely absent, but Finished With the Dogs is represented ("Corroded Dreams", the title track); The New Machine of Liechtenstein ("Def Con II", "Panic", "Near Dark", "SSP"); World Chaos ("Jungle of Lies", title track again), and so on, even some of the 21st century material being included like "Symbol of Spirit" (Strength, Power, Will, Passion) or "Master of Disaster" from the EP of the same name. Most importantly, the songs feel pretty flush with one another, and the fact that they are not presented in chronological sequence of their origins works to make this all feel fresh and consistent.

As for the new tracks, they feel like they're running a direct line to the past. "Borderland" charges straight forward with Sabine's ghastly vocals and some tense, effective rhythm guitars that draw from that old West Coast US train of pummeling presentation you would remember from Metallica or Testament in the mid 80s. The gang shouts are great, the ringing guitars over the chorus of "Entering the Now", the leads wild and sporadic, and the band never resorts to some crappy plebeian breakdown or anything else to try and feel 'modern'. This is love it or leave it, 100% Holy Moses, does no disservice to the band's legacy and it's probably the most fun I've had listening to the band outside of Finished With the Dogs, which was one of the hands down best German thrash/speed recordings of the 80s. Fans will lap it up. So should any thrasher wanting an intro to the band. A rare re-recording spree that actually works.