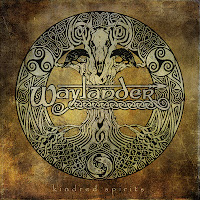 Of all the metal varieties in the world, folk is perhaps the most difficult to pull off effectively, since its very nature implies a heavily cultural influence that must be fused against the more decidedly aggressive elements. In the case of North Ireland's Waylander, it's been performing in this niche far longer than most, which shows in the band's tireless ability to implement solid riffing sequences and extreme metal blast beats, double bass, black rasping and semi-technical picking patterns with the melodies of whistles, mandolin, bodhran and other native instruments which help place Kindred Spirits on the map. But bear in mind that this is a metal album 'first', it's not just a faceless collection of toe tapping tavern jigs and gallantry permeated with pedestrian chugging, so if you're merely looking to dance about the moonlight naked with the elves with ethereal fairy vocals, step away.

I'm most reminded of Skyclad, but a more muscular interpretation of that group's Martin Walkyier fronted years with meatier guitars than the thrashing that comparison evokes. Lots of desperate, melodic lines cull the folk inspirations into a lattice of hostility in tracks like "A Path Well Trodden" or the rousing mug swinger "Twin Fires of Beltine". Many will evoke similarities to the melodic black/folk strains coming out of Sweden or Germany, but where a band like Suidakra might summon up strong Gaelic aesthetics in its writing, I feel as if Waylander has a more authentic stake in its heritage, and there's far more of a classic metal strain coursing through the band's veins, only wrought out in mightier, stomping beats and dense guitar textures. Most often, the multi-instrumentalist Dave Briggs will be responsible for the more evident, perky melodies, whereas your typical melodic death outfit would accomplish this through dual guitars. As one might predict, acoustic guitars also play a role in the songs here, but while I found their presence to be largely lackluster and serving only as ligaments between the album's metallic bone structure, they are never over abused or cheesy, not even in the "Grave of Giants" interlude with its cleaner, narrative vocal tone.

In fact, despite the glints of frolic and melody cast throughout, Kindred Spirits seems to be a belligerent and brooding experience, taking itself quite seriously, and therefore it's not bound to alienate the more extreme metal audience with frivolous lights of regrettable gaiety. The blooded rasp of the vocals, while not all that distinct from hundreds of other black metal front men, ensures that the music is kept gnarled, focused and punishing, not for the faintest of heart. In addition, Waylander fills out its tracks appreciably, even where they are 6-7 minutes in length you get enough dynamic versatility that they're never dulled down. That said, while the album is competent and consistent, few moments really leaped out at me. As solid as the band are at executing the varied patterns, I never felt there were many winning riffs or emotional peaks throughout the music, just a level 54 minutes of predictable, charging onslaughts contrasted with familiar folkish melodies whose novelty had worn thin a decade past. Fans who can fancy themselves an interest and investment on a crossroads between Primordial, Suidakra, Cruachan and early Skyclad may feast their hearts out with this, but I didn't get all that much from it. The execution is on point, the band members have a seasoned, solid skill set, but the songwriting never quite stuck to me.