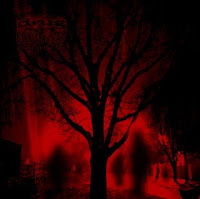 Upon my first exposure to Chicago's Drug Honkey and their 2008 album Death Dub, I have to admit I just wasn't prepared for the group's level of psychotropic sonic depression and ritual abuse, but this time I have come armed and ready: a bottle of vodka sits on the upper left corner of my desktop, next to a careful arrangement of painkillers and other substances I'd rather not discuss. My last will and testament has been prepared, notarized and sent off to the family attorney. I called my parents and loved ones to hear their voices for what might be the last time, and I broke out and loaded a handgun, just in case I needed a fast, decisive exit from the emotional oppression I was about to endure.

Several days later, I emerge fully destroyed from Ghost in the Fire, but thankfully the safety never came off the pistol, and the mixed liquor and pills weren't enough to kill me thanks to what I can only assume is some remnant of youthful metabolism. I realize my prolonged existence might disappoint a great number of you, but then, this band hasn't broken up yet. Ghost... is the band's fourth full-length excursion, and surprisingly more accessible than its predecessor, but it continues to wreak its crushing lessons upon the listener with baleful distinction and raw certainty. Some will dub this funeral doom, or death/doom, but in truth there are so many eclectics ingredients to the group's compositions that it defies any simple attempt at categorization. You can make out traces of sludge, psychedelic ambiance, even hardcore barking and a conversation, narcotic bred drawl infused with the harsher, growled vocals. The band certainly crawls along at a sluggish general pace, but where other groups like Skepticism or Esoteric provide trance-like hallucination and escape, these guys speak from the depression of the bottle, the heroin needle, the crackpipe and other urban vices.

Structurally and song-wise, this disc surpasses their last in overall quality because it's better able to grab the listener by his brow and then force his/her face directly down into a bowl of retch and torture. The huge, fuzzy bass lines will trip out your speakers within minutes, the drudging lower end chords serve as skeletal support for the eerie, minimal melodies over "Order of the Solar Temple",  the drums throw a lot of fills at you to help break up potential monotony, and and 'Honkey Head' Paul Gillis instantly captivates you with his expressive, vocal variation that ranges from a morbid, guttural abomination to a clearer, persuasive bark, all saturated in echo and reverb enough to rattle around your ears and brain like bullets that failed to exit through the back of your skull. The architecture of the music might not seem inherently complex or intricate, but it doesn't need to be: its harrowing texture leaves the same imprint on your heart whether you're listen to it the first or twentieth time, like an unlikely union of Disembowelment, Mindrot, Neurosis, Today is the Day and Rollins Band.

But Ghost in the Fire exceeds even this praise, thanks to the psychiatric variation coursing through each of the cuts. Songs like the title track or "Weight of the World" revel in their droning, dissonant discourse while Gillis crashes around the stratosphere like an extreme metal Leary, while the thuggish bass lines lurch along like primordial swamp predators, slowly closing on their sustenance. There's a subtle sense of bruised glory in pieces like "In Black Robe", where the riffs seem mildly more consonant and uplifting, and even the drier tones in tracks like "Five Years Up" compensate with the strong balance of percussion, unwashed feedback and the natural ambiance created through this crossroads of aural desolation. Not a song on this fucking album will fail to envelop you in mournful tatters, like some dopamine ragman coming to lay claim to your soul, and it's hands down one of the most compelling and simultaneously repellant arguments for human extinction you are likely to have all year, a masterful monolith of suffering and spiritual debilitation. Avoid at your own risk. Experience at twice that risk.