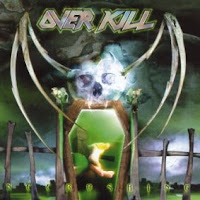 I don't hate that Overkill attempted to complement their thrash roots by weaving in and out of groove territory throughout the 90s (and beyond), I just hate that they did it with such a bland and laughable riff set, a flaw that plagues Necroshine for about 90% of its content and reduces it to rubble when placed even against its lackluster neighbors in their catalog. This is an album of ideas, sure, but poorly implemented ideas which, for the most part, result in little more than vapid shovelware. It might not represent the bottom of the trough in the New Yorkers' discography, but it's close enough to muss up I Hear Black's hair. Even the cover is weak, one of Travis Smith's less striking images, a skeletal Chaly re- envisioned into some relatively cluttered collage.

The best component of the album would be its production, which was handled by the band's friend Andy Katz, who also worked with D.D. Verni's other project The Bronx Casket Co. for a few albums. It's sleek, it's clean, it's got punch where necessary, and even if Overkill was not exactly a spotlight act in the late 90s, it mirrors the prowess of bigger bands: mainstream enough for a radio pop/rock audience, but still attuned for the heavy variation of the riffs. I also found that Bobby Blitz wrote some interesting harmonies and vocal lines, he was toiling with different rhythmic patterns that rarely felt lifted from the older records, often humming or singing a melody to throw off the listener. He even brought in his sister Mary to do a few backups, though they felt strangely atonal and unnecessary. The lyrics are a clear step up from a few of the albums leading to this, but there's still a sense that he's often attempting to squeeze words to create quirky, phonetic repetition with a bit of a burly blues inspiration. That said, I would hardly call any of Necroshine's chorus sequences essential or memorable, they simply seem more thought out than the rest of the instruments...

And that is where this album really falls flat for me: the guitar progressions. There are a few pure thrashers tucked into the folds, like "Revelation", but these are no more than passable. The individual rhythm and vocal lines are simply not that sticky or interesting, stock thrash which wouldn't even have earned the right of a B side during the Taking Over era. "I Am Fear" has a fraction more spunk to it, but at the same time it's pretty much predictable groove/thrash you'd expect out of Pantera or their ilk. Then there are tunes like the awful "My December", in which no amount of Blitz' charm can salvage such a banal and pedestrian slew of 2-3 note groove riffs. "Necroshine" is also suspect with its intensely generic grooves that almost make Korn or Roots era Sepultura seem complex in comparison. The incredibly dull, bass-driven doom grooves of "80 Cycles" which is about as fun as shearing corn, and despite the cleaner opening atmosphere of "Let Us Prey", it too lapses into a creative coma replete with connect-the-dots mid-paced thrash riffs that can't have taken Overkill more than 20 seconds to write.

It's sad to me that the catchiest thing on here is probably the pseudo punk anthem "Black Line", if only for the interplay of the vocal melodies with the very basic muted picking sequences, and even that doesn't have a quarter of the charisma of "Hello from the Gutter". What's even sadder is that, where so many of the group's contemporaries got called on their mistakes in the 90s, like Slayer or Megadeth, Necroshine seems to have been handed a 'free pass', when it's nearly as lame. Again, it was not a sore spot for me that the band were broadening their sound so much as they were writing such uninspired material, and this remains one of their worst albums in memory, the ringed residue of many a beer-sweat marring the surface of its inevitable function.