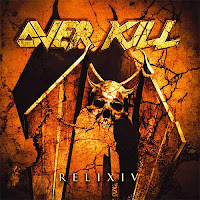 Perhaps better though of as RelapseXIV, Overkill's 2005 full-length takes a step back to the problems that were plaguing many of its predecessors like Necroshine, W.F.O. or From the Underground and Below, namely the fact that it seems to divide itself between a number of merely passable old school tracks redolent of their brighter 80s years and vapid groove metal tunes that are incontrovertibly insipid to the point that, for years, I've found it difficult to even remember that this album existed in the first place. It's not the worst of their studio efforts, its aroma more tolerable than the pungent experimentation of I Hear Black or the sorry arsed Necroshine, but after the band had begun to ascend from its qualitative slumber through Bloodletting and Killbox 13, it's a rather frustrating affair which really never needed to exist.

As I hear it, the problem with ReliXIV is that it really lacks ideas, most of the songs seemingly constructed out of the band's 90s riffing patterns, slightly altered. This was a problem with thrash metal in general in the prior decade, the band's simply ran out of inspiration to create fresh, progressive guitar blueprints that could carry the genre forward without needing to reduce it to a lowest common denominator platform of tough guy grooves for a moshing, hardcore influenced crowd who largely couldn't have given a shit about the content of metal as opposed to its inherent lifestyle. Just laying down palm muted processions of notes doesn't cut it, and a good number of cuts here like "Within Your Eyes" or "Loaded Rack", while well meaning and loyal to the band's origins, toss away their potential on boring guitars that don't really seem to involve much effort or technical skill, just predictable chords. What's more, though, even Bobby Blitz himself seems to have been leeched of all his own charisma, and few if any of his lines through the album cling to the brain like so many he has spat in the past...

Structurally, there is some solid production involved with the album, nice and meaty guitars rocking along with largely mid-paced Exodus palette. The chords are bold, there will occasionally be a thicker groove (intro to "Love", for example) or even a slower, tremolo picked piece. I wouldn't claim that this album had an excess of variation, though, because the songs seem to primarily hinge on slower, boring butt thrash like "Wheelz" or the mid-paced attempts to invoke the band's ritualistic enemy. Tunes like "The Mark" bring out some classic 70s metal riff sequences on top of the concrete drumming of Tim Mallere, but every card this album pulls out of its deck contributes to a losing hand. The grooves in "Play the Ace", for example are wholly generic bar-core slop that tons of groups were writing during the Pantera dominated 90s, and "Love" is such a shit tune that the quality of its riffing surpasses even the superfluous poignancy of its simplified title. The only song that dares pick up the energy to an appropriate level is "A Pound of Flesh" with its Slayer like speed metal velocity, but it too suffers form a dearth of creativity in the riffs.

It's hardly a terrible or particularly offensive album, just lackluster in all respects. Even the boring Travis Smith cover seemed played out and redundant (as with the previous record), Chaly relegated once more to the status of a gargoyle icon against a pretty uninteresting backdrop. I suppose ReliXIV could be said to sound professional enough, but ultimately it's just another supporting brick in the band's discography to keep them active and touring, and there are no classics here that belong in their set lists for fans to pine over. It's also one of those rare Overkill outings where the vocals are nearly as dull as the guitars. Not a good starting place if you find yourself new and interested in the bands, and I couldn't recommend to anyone save a fan of the most banal groove/thrash dated a decade before its release.