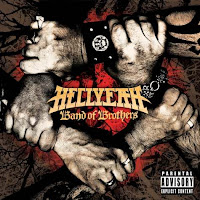 As 'wishful' as I might have been that Hellyeah would suddenly manifest destiny and become the rattlesnake wranglin', tobacco spittin' Texan groove metal beast that I know lurks within it, Band of Brothers is more or less the Pantera album there never was, a pretty straight shot of tough guy tropes circa Vulgar Display of Power & Far Beyond Driven with a few clean chorus sequences to sate that disenfranchised nu/groove metal radio rock audience who need a break from the band's constant, leaden breakdowns and jumpin' bean bounce rhythms. Still, as miserable as their prior albums Hellyeah and Stampede were, this album does see a further solidarity of the band's writing skills, and I'd say the riff patterns feel more punchy and violent. If only the Dallas bruisers could thematically match the guitar lines with cooler lyrics about cacti, lassos and abandoned vehicles with trunks full of cocaine in the desert, they'd be my dream band...

Okay, I'm lying about that, but at least they'd amount to something more than drunken leather jock metal with a few cowboy hats for effect, and the sorts of banal personal lyrics that always plague the groove metal niche, loaded with cliche lines and concepts relevant to angst-ridden teens and barroom brawlers. I will say that these guys lay on the riffs quite angrily this time out, and songs like "Call It Like I See It", "War In Me" definitely draw straight from the Exhorder/Dimebag Darrell well of leaden, swaggering palm muted hostility set to Vinnie Paul's rock-infused drums. The leads tend towards bluesy, burning patterns dowsed in heavy effects, fairly fitting and lacking in overindulgence as the band careens towards their next fist swinging rhythm, always careful to set up breakdowns that will have their core audience in stitches and casts by the end of a performance. They also almost managed to get through an entire record without forcing our noses into the ballad trough, with the exception of "Between You and Nowhere" which sounds like it belongs on Load or Reload-era Metallica or a Staind record with James Hetfield guesting.

Nothing wrong with the production values here. Again, if you love Dimebag's processed but efficient tone and riffing sequences, then Maxwell and Tribbett do a respectable homage while branching out a little in the solos. I don't particularly enjoy how Chad Gray uses his voice here, but he's fluid enough in his transitions from the traditional Anselmo rrrrruuuuuaaas and hwaass to the cleaner tones or a slightly more vicious and serpentine rasp to the tough guy narrative style. Bob Kakaha's bass-lines are loud and pushy and Paul's about as peppy as the songs allow, just don't expect much extreme metal drumming, he lays down a pretty standard array of beats and fills that play more to the curving momentum of the guitars. That said, without any exception, the songs pour like wet concrete into one ear, mix around in your head, never seem to solidify, and then drip out the opposite. There is just no place for this music anymore except in tribute to the oft-maligned dregs of the 90s where thrash devolved from its inspirational roots to everyman groove bullshit. 'we walk the walk'? Indeed.

Tunes like "Rage Burn" and "Drink Drank Drunk" have no other value except the comical, and I really wish the band would put their collective necks on the line and tear out a few faster pieces instead of just moving at the mid-paced groove/step circa "Walk" or their slower breakdowns. As an example, the last song, lamely titled "What It Takes To Be Me" is about half the speed of what I'd like to hear from them. In the end, though, the lyrics and music here just do nothing for me. The riff set is surely superior to Stampede, but as someone who rarely ever feels any urge to break out his copy of Vulgar Display of Power, I can think of no impetus to seek out an album that so stands in its shadow. If you live and breathe "Mouth for War" or "I'm Broken", or blues-based groove metal bands like Black Label Society, or maybe even a heavier alternative to the German Desperadoz, then perhaps you'll have a more favorable reaction to this record than I did. To me, Band of Brothers feels like I stepped into a saloon seeking a gun fight, a prostitute and a few hands of poker with outlaws, only to discover it was some lame gift shop where the best I could do was an "I Survived the Alamo" t-shirt. Wholly forgettable when it's not outright weak.