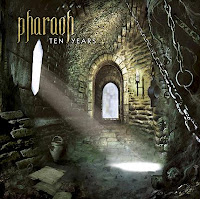 As curious as the cover selections seemed, what I was most looking forward to about Pharaoh's Ten Years anniversary EP was hearing the original songs that were recorded during the Be Gone sessions. Being that this was one of my favorite albums of 2008, and helped reinstate my faith in American power metal after so many years of dwindling returns and all too sparse success stories, I was quite compelled to hear which pieces fell just short of that pedestal of perfection I held it up to, because they must still kick a lot of ass, right? Well, yes and no. I can see why several of these selections were omitted from the full-length, due to simpler structures and less climactic vocal melodies, but even then there is something fresh and functional about them.

In fact, two of these are quite good. "Reflection and the Inevitable Future" is saturated with delicate dual melodies, winding bass lines and striking vocal progressions, and the entire lead sequence at the center of the cut is near divine in that late 80s Fates Warning mold. I also quite enjoyed the opener "Ten Years" itself for much the same reason, though this is a more straight to the face hybrid of melodic power and even some thrashing which recalls bands like Vicious Rumors, and has that same, fulfilling level of complexity in the guitars that was present through much of the full-length. Can't say as much for "Nothing I Can Say": oodles of melodies here, but I felt like the vocals were less memorable and the latter half of the track was much more intense than the former. "When We Fly" was my least favorite of the originals here, though, the rhythm guitars were somewhat bland and, once more, the vocals/chorus just doesn't live up to the quality of their full-length material.

Pharaoh's cover of Coroner's "Tunnel of Pain" from the previous year didn't differ all that much from the original, apart from the obvious vocal difference, but I feel like with Slayer's "Tormentor" they've nearly transformed the violent, dark speed/thrash of the original into a glorious anthem all their own, and it's probably the most fun I had on this entire EP. More pump to the guitars, and Tim focuses on his meatier mid range for the choruses while the melodies lend themselves well to Pharaoh's clinical production values. The cover of "White Light" from British rockers New Model Army is also quite epic, with its emotional chorus escalation and atmosphere, but I surprisingly found it a little closer to what I remember of the original, just with a lot more guitar throughout, though I don't think Aymar's performance here is all that inspiring next to the Justin Sullivan-fronted original. Actually, I thought Sepultura did a better job with their version of "The Hunt" off Chaos A.D., but it's still pretty cool all the same.

In the end, the quality spread across Ten Years is decent enough for a short form release, but this is not a band which has yet disappointed me. The original songs are not up to the incredible standards of Be Gone, so they were justified in collecting them here, and the production at least is comparable. If you love their music, and find it in short supply, then pick this up, especially for the Slayer tune, but first time listeners are better off with any of the four full-lengths.