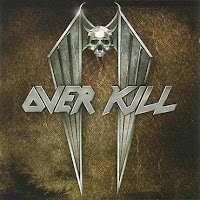 With its intense Slayer-ific breakdown, and the eerie chorus vocals that reprise the opening guitar melody, "Devil by the Tail" was probably the best album opener Overkill had unleashed in several years, and made me instantly excited that the band had reached deep into themselves to produce a proper knuckle sandwich worthy of the brand. There was still a hint or two of the bland riffing that plagued Necroshine, and the band was largely committed to creating similar, simplistic structures rather than finally evolving beyond the threshold they built in the later 80s, but a lot of the riffs on this seem to come together, and ultimately there are about a half-dozen songs on this thing that are comparably fun to much of the band's much lauded material of recent years.

Tracks like "Damned" or "The One" might seem to hinge on mere reconfigurations of riffs the band had written earlier for weaker records, but they possess excellent build-ups and payout choruses that stick with you at least for a few months. I don't like the backing vocals in the latter, granted, they're pretty phoned in and might have been better mixed to provide added power, but Blitz carries the day with relative ease despite the almost pedestrian mentality behind a lot of the mid-paced thrash riffing. "The Sound of Dying" has a great momentum to it, the sporadic and stringy leads, and "Struck Down" has some nice descending lines in the bass and guitar while building a speed/thrash gait not unlike "What I'm Missing", one of the standouts from the prior album. "Unholy" is another muscular piece which wouldn't have seemed out of place on a record like Taking Over, while "No Lights" and "Crystal Clear" make great use of more sluggish ball fisted pacing, the latter having some great vocals where Bobby almost seems to channel Ronny James Dio.

This was Derek 'The Skull' Tailer's studio debut in the band, returning them to the 5-man configuration they had briefly dropped off, but while he and Linsk manage to carve out a nice double slice of sirloin, I would not put it far past its predecessor. I don't know if it was a conscious decision, but the bass here, apart from being audible, doesn't exactly stand out next to the rhythm guitars, and Verni's lines feel as distinct as they had been in 88-89 or even some of their less appealing groove metal infusions. Once more, you get the few traces of 90s Overkill, but to be honest I think you could probably erase the band's career from 1991-2000 and just tack this on after The Years of Decay for a perfectly fluid continuity. Not the greatest of the band's albums, but this was more enjoyable to me than Bloodletting and the music far outshines the bland cover and title. I realize Ironbound is considered this group's return to the thrashing fore, partly due to a whole new generational audience exploring the thrash revival, but Killbox 13 was functional enough to earn that honor.