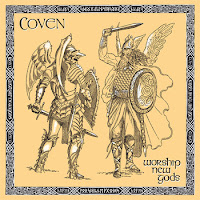 This is not the thrash Coven from Seattle, nor the Chicago occult prog rockers most active in the late 60s and 70s, but a heavy/doom act out of Michigan (also known as Coven 13) which is finally seeing the CD issue of its seminal 1987 album Worship New Gods through Shadow Kingdom Records 25 years after it's original release. Naturally, the debut sounds as old as it looks, but I think for a good number of fans in this niche, its antiquity will only serve in its favor, as it conjures forth a genuine nostalgia for the 80s efforts of bands like Cirith Ungol, Pentagram, Manilla Road and St. Vitus. Sword and sorcery spent in harmonious, atmospheric flesh with plenty of variation to keep the listener hooked as if he/she were smoking a bone while deeply immersed in a Fritz Leiber or Michael Moorcock story.

In truth, Coven covered a rather broad swath of terrain with this record, from the pure Black Sabbath digs and grooves of opener "Riddle of Steel" to the Viking arena-punk of "Ruler", which almost sounds like it was being played at some open air festival to an army of Saxon dogs, churning chords below the appreciable bombast of vocalist David Landrum whose jilted inflection carries all the way to the rafters of the stadium. Songs like "Burial Ground" provoke a total war mentality, with great, reflexive drumming and nasty chord curves worthy of the barrows and crypts the title promises, while others like "Threshold of the New" ride aloft a surge of pure NWOBHM thunder interlaced with off the hinge lead sequences and bumper car bass lines that seem like a byproduct of the 70s more so than the 80s. What's more, the level of reverb and the raw, lower volume of the guitars tend to immortalize the hooks and drums throughout; by today's standards, of even by the higher budget acts of the 80s, Worship New Gods might seem amateurish, but these very flaws lend it a timelessness that transports the listener back to the grounds of its fertile creation.

Landrum can prove a bit much in places, as his delivery is constantly wavering and in a few spots marginally out of pitch, but overall I think its imperfection too lends the record a distinct character which it might not otherwise enjoy with a tighter, polished performance. It says a lot that, after 25 years and no other prior exposure aside from perhaps a Youtube clip, this album can work its charms on someone so new to it, and even when it descends into total clamor like the freakout mid-"Loki" in which Landrum gets perhaps a little too 'in character', I found myself drifting back to memories of caverns and castles, witches and warlocks, heroes and rogues, dragons and damsels, and enjoyed its warped miasma of doom, early British 80s hymns and punk hysteria. If you're one to unlock the crypts and mine the dustbins and annals of obscurity within the trad metal spectrum, Coven's debut deserves a first listen, or a second listen; it's as fuming as a mythic bull ready for the charge, but also frivolous and fun. Do you read Robert E. Howard stories and listen to Samson, old Maiden or Spartan Warrior? This will butter your bread. The real question is, now that they're active again, can they follow this up with an equivocal level of immersion and personality?