Unconsecrated - Awakening in the Cemetery Grave (2012) 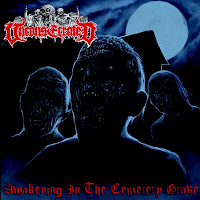 Awakening in the Cemetery Grave is a comprehensive collection of both Unconsecrated demos that were released together in 2008 as a full-length, and the band's 2010 EP Slave to the Grave, so for many new to the Spaniards, it would prove a decisive entry into their universe of Swedish nostalgia, a completeness and convenience you've got to admire. Over 73 minutes of material, including an appropriate cover of "Dead Forever" from their undoubted influences Unleashed, and I have to say I rather like the band's simplistic undead artwork aesthetics, both on this release and the constituent demos and EPs. Classy, effective, and leaving no vagaries to the prospective audience about what this band does, and what they are getting into.

Where Unconsecrated becomes a more difficult sell is in its blatant lack of novelty, since there are scores if not hundreds of European bands plying the same late 80s/early 90s Swedish terrain with little reinvention of its intrinsic elements, the familiar crunch of the guitar tone and the moody atmosphere created through the contrast of such thick rhythm guitars, forceful but hollow gutturals and eerie lead sequences. I suppose the most direct correlation would be to Entombed, a hybrid of Left Hand Path and Clandestine in particular, with the Slave to the Grave materials like "Buried in the Crypt" sounding closest to the latter. Of course we could bring in parallels to Dismember, Grave and Unleashed, but the phrasing of the chord sequences most reminded me of the pervasive sense of evil found on aforementioned albums. The one difference might be the vocals, which have a more distinctly downcast brutality to them; and also, when we travel back a little further with the 2008 demos, they seem to have adopted a more decidedly more old school Floridian flair to the writing with more tremolo work and riff-writing akin to early Obituary, Autopsy and Death.

In other words, Awakening in the Cemetery Grave is not shy about revealing this group's points of transition where certain influences began to override others. It helps that the production here is almost unanimously clear and compact without bordering on over-polish. The earlier demo recordings have a drier tone to them, while the EP seems more slavish and saturated to the massive guitars. This band is also quite good at coordinating its intro and instrumental sequences, using a lot of choirs, symphonic touches and even beautiful and exquisite acoustic guitar passages ("Breath of Desolation"). Their instrumentation is competent all around, even if it never breaks beyond the bounds of its niche or attempts to incorporate added levels of complexity in the composition of the guitars. Granted, the riffs never quite feel essential nor as memorable as the albums that no doubt influenced Unconsecrated, but surely if you're just in the mood for more of what you are used to then it should suffice.

And that's really the point that will make or break this release in the eyes and ears of many death metal fans: can you stay up night after night experiencing the same slasher or zombie horror film plots and still enjoy them? Do you still get excited at the very notion of albums like Clandestine, Indecent & Obscene, Slowly We Rot, Where No Life Dwells, Severed Survival and Into the Grave? If the answer is yes, then it might be hard to find any substantial fault with Unconsecrated. They're fluent in the this cornerstone of the genre, they provoke the atmosphere of the past, the lyrics are decent, and the writing is varied enough that they don't continuously bleat out the same rhythms ad infinitum. I didn't personally get as much out of the songs here as I have from the classics, or even from a number of other contemporary necromancers mining the style's burial grounds, but the Spaniards aren't bad, and at least they and the label are giving you a good deal.