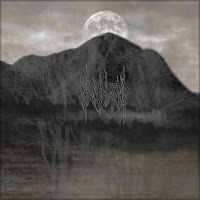 As one who is not particularly enamored of stewing in his own sweat during the pestilent, persistent heat of summer months, I have to thank those labels and bands who seek to alleviate my suffering with a cold and ready blast of cruelty and desolation to herald the salvation granted me by the climes of autumn and fall. It's not that I'm an especially 'grim' guy, by any means, but I like to watch my own breath in the air. It's in the blood. I am not a beach person. So, to this list of seasonal saviors I must now add the English project Nordland, for one of the more haunted and grievous eponymous albums I've heard of late, rendered all the more impressive by the fact that it's the product of a single musician, Vorh, who handles all vocals and instrumentation.

Not a novel feat within this genre, perhaps, but Vorh has an appreciable ability to wreak gray emptiness upon the listener without any threat of excess warmth or happiness invading a composition. However, this is not constructed through any lack of variation or atmosphere, and these traits are crucial in breaking up the longer duration of tunes like "Vorscara" or "Nordland" which are well over ten minutes in length. He'll transition from standard Immortal/Enslaved tremolo riffing to slower, charnel grooves circa late 80s Bathory, to even sparser sequences of droning, spacious chords that resonate against the natural or synthetic ambiance in the background. As a result, the 60+ minutes of the album move more confidently than one might dread. You won't experience long passages of mind-numbing repetition here, the dynamics are constantly in flux. From the more driving and depressive vice of the chords in "Morth" to the drifting clean guitars that inaugurate "Lords of the Great Dwelling", there is almost no means of predicting what precisely will happen next.

But my accolades can't end there, because Nordland also sounds extravagant, with a production that does not shy away from richness in favor of seeming excessively 'basement' or raw. Full, pulverizing distorted bass lines thunder below the vortices of soul-leeching guitars. The drums sound great, with a full willingness to meddle with tempo tropes, like blasting beneath slower chord patterns. I also like that Vorh baits you along with the promise of some grand, atmospheric climax lurking in the depths of the more standard riffing fare: you always know it's out there, waiting its turn. That said, these passages also serve to overshadow some of the moments leading up to them. Individually, a lot of the pure black metal riffs could use some added notation to make them more interesting. They function as carving knives when one is in the moment, but they don't always cut deeply into the memory. Also, Vorh's thick blackened rasp skirts monotony for a good portion of the album; he does mix it up occasionally, but the further torment of shifted screams and howls might have worked wonders over the crushing despair of the instruments.

Ultimately, though, Nordland is an effective foray into atmospheric antiquity and human suffering, which is about as cold as you'd expect when looking upon either of its covers. Perfect it is not, but neither is it ever cheap or shallow. There is a depth here that warrants further development. If Vorh has shown this much competence in only the first recording, then who knows what the future might hold? The album, originally self-released in 2011, has recently gotten an official reissue through Glorious North, and deservedly so. I would recommend this for those seeking varied and textured Scandinavian-style black metal or simply an escape from the tyranny of the sun.