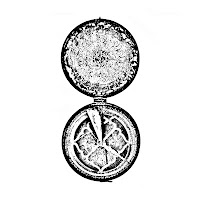 Three clues that I'm going to be terrified by a recording: the inclusion of a quote from existential Argentinean author Jorge Luis Borges in the liner notes, a title with an obscure reference I might find in a Lovecraft story, and the involvement of Umesh Amtey, brainchild of the defunct Brown Jenkins, whose hypnotic swan song Death Obsession was a highlight of the year 2009. The Ibn Ghazi EP proves guilty of all three, and if you felt the pangs of irritating lightness beginning to infest the pulchritude of oblique horror you call a universe at the dissolution of Amtey's alma mater, rest assured that he and his new bandmates will absolve you of any sense of security you might have invested in these ensuing years.

The Ash Eaters certainly bridge a natural continuity with that earlier project, servitors of discordant and experimental black metal, but where Death Obsession war borne on structured wings of discordant hypnosis, I found the material here to be far more jarring, chaotic and clashing. The band is not very low-end heavy, and thus they pierce your ears with this resplendent madhouse of jangling, haunted notes that ring out over the occasionally more chugged, subtle rhythm textures and the highly dynamic drumming. Add to that the eerie, atonal chants of the longer of the EP's two constituent pieces, "These Are the Inhabitants of the Fire", and you've got yourself a sinister bedlam with which to lose sleep and frighten any sane person with the misfortune of your acquaintance, rooted somewhere in the treacherous soil of Burzum's Filosofem and other depressive works, then expanded outward to a broader, alien darkness.

As one might expect from prior exposure to Amtey's earlier recordings, this is not easy listening, an it nearly serves as a set piece for one's plummet into unraveling. The inclusion of the read-along, prayer-like lyrics only add to the sense of spectral desperation created through the corrosive (and largely instrumental) note progressions, and the higher pitch of the music allows it to quickly penetrate your conscience. In listening, I felt I was the victim in some cautionary, silent horror film, the shifting rhythms of the band queuing scenes of dread and climax. The one caveat is that between the two tracks, it's an admittedly short experience, just over 12 minutes in duration, and I feel like the cruel aesthetics of the project would suit a more substantial recording with further variation of mood and texture. That said, it is a download, and this is malevolent and effective artistry which proves there are still fertile soils from which to foment the stuff of black, surreal nightmare. Whether you're acclimated to Brown Jenkins and other tortured, dissonant post-black progeny, or you just hate God, you'll wish to take notice of this affront.