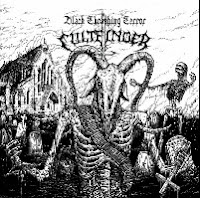 The diabolic forces behind the UK's Cultfinder are not out to deceive anyone with the title of this EP. Three tracks and about 10 minutes of rabid velocity, they trample the listener with accelerated floods of fuzzed out chords, near incessant blasting beats and truly venomous, reverb laden rasps that explode into your ears like manhole covers bursting off the roof of Hell itself as its about to ejaculate its demonic contents into the mortal world. Quite a surprise, really, when you take into account that the rhythm section hails from the far slower Witchsorrow, another English trio which has had some luck on Rise Above Records, but I'd say they more than prove they can keep up with the manic bursts of infernal energy and pissed off diatribe of one Rob Belial.

The black metal half of this equation is readily apparent in the drumming and vocals, the latter of which draw upon the blueprints of Mille Petrozza, Quorthon and Dead in equal measure, but the structure of the thrash riffing is born more of a violent crossover/hardcore/grind influence than, say, Kreator or Destruction, or even the chunkier and riff-centered West Coast speed/thrash of the 80s. Cultfinder's guitar progressions are in general not very unique, clinical or complex at all, but more of an onslaught of chords that are performed at a pummeling pace in between the few doomed breakdowns where they are left to resonate over less harried drums (like the intro to the titular opener). Granted, this gives them some needed muscle when the drummer starts to open up into one of the blast beats, but the tradeoff is that the patterns are often pretty familiar and lose their capacity to surprise the listener. It's just not as riffy as something like Sentence of Death, or Sweden's Antichrist, whose debut Forbidden World remains one of the best I've heard in this niche for several years.

"Witching Curse" is probably the most varied of the tracks, if only because it lapses into some doom elements redolent of the rhythm section's other group, but I think pound for pound it is "Black Thrashing Terror" itself which provides the most carnal knuckle dusting, the most memorable bruising. I must also say that, while not wholly impressed with the actual songwriting, the production on this thing is fantastic. The guitars puerile, muddy and raw without sacrificing clarity, the drums very live and tactile, and Rob Belial's voice is the measure of snarling fiends with twice or more his experience. You might have heard this all before, but it's no less fun in the hands of these miscreants, so let the curb-stomping of Christian dreams and prayers commence! Wear armor when listening. Recommended to fans of Deathhammer, Witchburner, Bathory's s/t debut, old Kreator/Sodom, and Canadian flesh rippers like Slaughter, Revenge and Blasphemy.