A Forest of Stars - A Shadowplay for Yesterdays (2012) 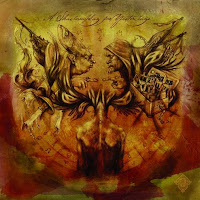 It's hard to fault a band like A Forest of Stars for anything, as they tackle such a broad and delicious vista of sound that the very ambition of the music alone is enough to inspire interest in where their journey will take them. Progressive, melancholic rock and folk influences are wound across bleak, tremolo picked melodic black metal sequences saturated with textures, and the vocalist is almost as charismatic as a Martin Walkyier if you took transferred him out out of his vicious black/thrash territory and placed him in a more spacious, solemn environment (in fact, several of the song titles reminded of Sabbat and Skyclad). The band experiments with its instrumentation, few songs ever sound quite the same and they paint both lush and leeching scenery across the fields, forests and streams of their native land that it's hard not to drown.

Having said that, I feel that there are still some components which don't entirely sell me on their sound. For example, their lengthier tracks, despite all the implementation of synthesizers, cleaner passages, or female vocals will often devolve into rather predictable patterns that no amount of atmosphere can overcome, and while I admire the poetry invested in some of the narrative vocals, like the gorgeous intro "Directionless Resurrection", I often felt like they were a distraction from some pretty fabulous music, and the male/female  duet vox (as in "Corvus Corona part 2" seem slightly disparate). Otherwise, the band are quite profound at absorbing the listener into varied climes, like the electronic-infused instrumental interlude "Man's Laughter" or the folksy eruption of sadness "Left Behind as Static", or the beautiful "Underside of Eden" which morphs from spikes of festive flute into distant, distant zephyr choirs and even passages of blasting and double bass. In fact, I'd be hard pressed to find a single song on this album which doesn't offer at least something compelling...

As for the production, A Shadowplay for Yesterdays is this admittedly level aural tapestry which invites the listener to pick out the individual instruments once all the band are firing simultaneously. There are points at which some of the guitar riffs feel drowned beneath the drums and the more atmospheric instrumentation, but really this gives more of an 'outdoors' impression, and a number of the riffs sit right on top of the mix when there isn't a lot else happening. The flutes, keys and acoustics all fit very well into the puzzle, and despite the wealth of instruments A Forest of Stars manage to unify everything into a cohesive, conceptual experience. Overall, I found the prior album The Opportunistic Thieves of Spring mildly more mesmerizing and interesting than this one, but the English band is clearly one of the most distinct in its field, and I hold out hope that it's only a matter of time before they reveal some genre-redefining masterpiece. They've all the tools and talent, I'm just waiting for a tastier array of guitar progressions equivocal to the lyrics and atmosphere.