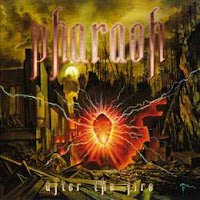 One of the things that first struck me when hearing Pharaoh almost a decade ago was just how obvious the members' love for metal music was, and I think this carries through in a big way to their compositions. The members have an enormous collective pool of experience, and not just because of their involvement with other groups like Dawnbringer, Control Denied, Superchrist, etc, but for instance Matt Johnsen has written with several 'zines including Metal Maniac and has a massive CD collection. When it comes down to it, these guys ARE metal nerds, and this is precisely the reason they succeed. Who better to fight back the tides of stagnation from an ailing niche than those so well versed in its flaws and redundancies? I mean, let's face it, while there are plenty of trad and power metal groups worldwide, and the styles' live presence in Europe and other foreign countries maintains some stability, the US is not exactly a hotbed for it.

We've got good bands, even a few festivals, but the style involved seems to resonate with only a few loyalist flag wavers from the 80s and adventurous youngsters who are interested in the roots and see the appeal. It's heavily outdrawn at gigs by death, black and 'core tours, and younger audiences (who, whether you'd like to admit or not, are vital for any music scene) seem to migrate to the next biggest, angriest fashionistas available. Generations tend to carve out their own cultural and subcultural identities, and the traditional approach implicit to a lot of 70s and 80s worship, or as several acquaintances have dubbed to me, the 'old man metal', is just not 'theirs', though some seem to appreciate it with a sense of irony. I mention all of this, because I have long felt that Pharaoh might just be one of the bands that breaks this mold. They certainly cull their riffing aspiration from all manner of bands in the 80s, but they apply a fresh coat of paint which earns them a level of distinction so few have attained, and they remain one of the best and brightest hopes for the style.

This is achieved through the songwriting, the unique vocals of Tim Aymar, and the band's heavy emphasis on melodies so brazen they often border on 8-bit video game era purity, and though Pharaoh has grown more complex through the years, they've maintained these aspects through all four of their full-lengths. Their 2003 debut After the Fire, released through Cruz Del Sur music, is perhaps the crudest of their efforts to date, but all of the aforementioned elements were already established. Matt Johnsen's heavy sense of melodic refinement floods through the intro, and persists across the vocal tracks, mounted on the bedrock of more familiar charging triplets and chord patterns, but creating an extra, sugary majesty that resonates deep within the listeners' ears. The writing impetus hearkens back to the later 80s, where groups were forcing ideas up against the boundaries of speed/power metal tradition, and ramping up personal prowess. Pharaoh might not be as manically classical as Helstar in their prime, or as explosive, shrieking and progressive as the power thrashers Toxik and Realm, but they often feel as if they were cut from a similar cloth, taking Iron Maiden roots and then saturated them with a glimmering haze of harmonies.

Aymar plays a huge role here, due to the varied dimensions of his voice. In addition to the more obvious, familiar inflections of Dicksinon, Dio and Halford, he possesses a smoky huskiness in the lower range redolent of Omen's late J.D. Kimball. His screams are quite shrill, but I most enjoy his sustained, upper pitch vocals that have a natural waver to them. Having only heard the guy on the rather underwhelming Control Denied record The Fragile Art of Existence in 1999 (with Chuck Schuldiner), I had an idea of what to expect, but where that album was a timid sampler of his potential, he seems to completely unleash his emotions in Pharaoh, and After the Fire is far richer for it as you'll hear in the title track, where he soars over those catchy, popping melodies in the chorus; or "Solar Flight" where he matches the momentum of the charging rhythm guitar like a hawk keeping pace with a semi truck on a desert highway. I think it's true that the man has some limitations, but the range between pitch parameters, and the conviction and fullness of his timbre ensure that we've got a long way to go before I ever get sick of hearing him.

Rhythmically, the Chrises (Kern and Black) invest a versatile backdrop over which the guitars and voice can journey, but they are no slouches themselves. The percussion on this album has a pretty down to earth, studio feel to it which cymbal slap and tom fill, and Kerns weaves both a steady Steve Harris stream of muscular low end and some progressive rock influence that doesn't always follow the guitar directly. He gives you something else to listen to, which is more than I can say for many in his position. After the Fire doesn't gleam quite as much as the later records in terms of production, it was after all a debut and the band was still sharpening the sword, but it's all quite clear and honest, with a decent crispness to the rhythm guitar and an all around clarity where you can pick out each melody and vocal track and not lose the solidarity from the drums and bass. The lyrics are also quite nice, personal and occasionally cliched, but it wasn't as if they were writing trite, cut and paste fantasy phrases like those that confine many other power metal groups.

Song for song, After the Fire is not a match for The Longest Night or Be Gone, in fact it remains their least memorable full-length to date, due partly to the fact that several of the songs manifest in slightly predictable configurations where the melodies or vocals are really the only aspects steering the listener's interest. There is unquestionable variation here, from the more galloping tunes "After the Fire" and "Solar Flight" to the more introspective, Maiden-like "Flash of the Dark", but only half the songs really stick for any good length of time. But as a blueprint, it functions admirably: all of their later records are built off similar emotions evolved through superior riffing and chorus sequences that beg for repeated listens. After the Fire, not so much, there are a few tracks like "Now is the Time", "Solar Flight" and the title cut that belong on a highlight reel, but the rest aren't quite so charming by comparison, and the end of the album in particular seems to dip in memorable appeal.

Even then, though, it's a great first album, a positive introduction to a band which continues to struggle on in a world of mallcore, djent and Morbid Angel techno to mold the past with the clay of the future, and fans that have jumped on this wagon at any later point can reach back and appreciate it for its similarities, as it's not incredibly difficult in thematic or stylistic execution than the excellent sophomore or their 2008 masterpiece.