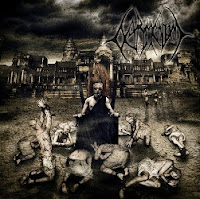 Though I'm a bit late to the party on this one, Detrimentum strikes me as truly an anomaly in today's death metal spectrum, a rare act that balances both its brutality and melodic sensibility on the head of a pin, and in turn provides such a depth of songwriting chops that it should possess an open appeal to a large cross-section of extreme metal fan. Most groups shoot for one or the other of these contrasts, but in listening through the sophomore Inhuman Disgrace, I experienced such an intense level of musicality and refinement over the tropes of harried, technical riffing, guttural verbosity and athletic foot and handwork that I must wonder: why this group is not spoken of in louder and wider circles? I must now add my voice to the choir in battling this gross negligence...

Morbid Angel would be an obvious point of reference here, since the band broaches that same level of intense, faster paced riffing and nuance for dynamic grooves, but in truth Detrimentum have an added accessibility they've drawn from a number of other influences. On the more extreme end of the writing, I hear traces of Suffocation and Cryptopsy, perhaps some of Pestilence's early, surgical thrashing, but the more melodic, solemn sheen that inaugurates "Effigies of the Silent Kings" reminds me of old Paradise Lost (of all bands!), and the lead sequences permeating tracks like "The Journeyman's Lament" hearken towards the inspiration of progressive death metal standards like 90s Death. In addition, they've got an inspirational to just rush the listener with an incredible breakout of catchiness as in the track "Dominus Detrimentum", while the vocals continue to bludgeon along, reminding you that this is not some breezy, spring afternoon in a field full of flowers. The level of variation through the sophomore is superb, no two songs will sound quite alike, and the musicianship is top notch.

These aren't just shallow, dime a dozen melodies other, but fusions of notation that fix quite nicely onto the intensity of the drumming, and where applicable, as in "The Crimson Legacy" intro, summon forth an acute atmosphere you're just not going to hear on the lion's share of death metal recordings of late. The mix of the record is pristine, you can pick out each instrumental instrument without the usual levels of saturated polish, and despite the brightness of the leads and harmonies, there's a pervasive balance of darkness. I do feel that the instruments rather outclass the inflection of the vocals, which are fairly average quality for the genre, but despite the fact that all of the album's constituent ingredients might themselves not feel unique, the way they gel into this seasoned, maturated 'total package' is admirable, and fewer death metal albums in recent years have been so damned well rounded. Even the lyrics are good. This star is clearly rising, its only obstacle in the level of exposure it can accumulate, and Inhuman Disgrace is well worth picking up.