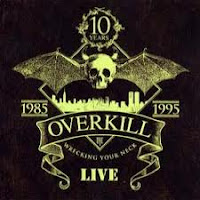 No one could ever rake Overkill over the coals for some premature live recording, they waited an entire decade and seven full-length studio LPs before venturing into this territory, and when they did, the format was undeniably in the fan's favor: two discs, 22 tracks and well over 100 minutes of material spanning their career to date. Technically, they had put out a few rare short-form releases with live tracks, but this was really their first commercial product of its type, and more substantial than what a lot of thrash bands had offered through the 80s on their first live discs. This was highly representative of where the band was at this point, an unstoppable 18-wheeler rambling through the 90s without looking back, the only sacrifice to their momentum coming in songwriting quality.

Unfortunately, the real obstacle for me in this recording is that it's just not 'made for me'. As someone who had a muted reaction to their more recent fare like I Hear Black and W.F.O., the emphasis on the newer material in the set holds little value. Granted, it made sense that they'd be incorporating current compositions into 1995 gig, but few if any of these particular tunes seem improved to me in the live arena. The selection of cuts drawn off the records I love is rather skimpy: just "Rotten to the Core" from Feel the Fire, "Wrecking Crew" and "Powersurge" from Taking Over, "Hello from the Gutter" from Under the Influence and then "Elimination" from The Years of Decay (they also perform "Skullkrusher", but it's a drag as always). Now, compare this to the inclusion of FIVE tracks from Horrorscope or SEVEN from W.F.O. and you've got an album inherently skewed away from my attention span. In their defense, they only break out two tracks from the unwelcome I Hear Black ("Spiritual Void", "World of Hurt"), but that's as many as they played from any of the classics...

Aside from that, Wrecking Your Neck Live just doesn't sound particularly great to me, which is a shame since it's delivered with audible clarity: punchy guitars, omnipresent bass, bleeding leads, capable drumming and Blitz summoned at just the proper level not to drown out the instruments. I think the mix just feels a little dry to my ears, as if each constituent track was leveled out but they just couldn't make them sound all that exciting. The cheers from the Ohio crowd are nice, often drifting into a spectral presence behind calmer moments in the set (like the exclusive bass/guitar instrumental "Anxiety" which is decent), and Blitz is the consummate entertainer when he speaks out between each of the band's pummeling concoctions, but in all the album never struck me as one of those essential live experiences like, say, Live Without Sense.

That said, it's also far from one of the worst I've heard, and fans who clung closely to the band's 1991-94 evolution and enjoyed all those records with Merritt Gant and Rob Cannavino will find it climactic, as this was also their swan song with Overkill. I am just not to be counted among these, and while I had hoped the live translations of several of the songs might further enamor me to them, I remained indifferent, not only from this album, but from several of their gigs I attended in person. With a little less Horrorscope or W.F.O., and perhaps a few other essentials like "Hammerhead", "Shred", "Deny the Cross" and "Electro-Violence", I'd have been more interested.