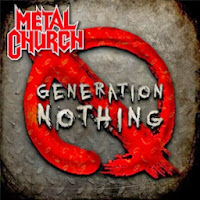 I am not a man entirely immune to hype, so when I saw some advance praise for the latest piece of perseverance circa Kurdt Vanderhoof and  Metal Church I got mildly excited. Could it be the first record I've really enjoyed by them in 27 years? In retrospect, I probably shouldn't have gotten my hopes up, because I just haven't been hot on any of the material they've put out since. Sure, most have ranged from 'alright' to decent, and they've not betrayed us with a Load or Risk or Virtual XI or anything scraping the barrel's bottom quite so hard. But at best, their efforts with Mike Howe and Ronny Munroe have been decidedly middle of the road. Once in a while: confusingly overrated. Metal Church has played the law of averages for far too long, and Generation Nothing is just Nothing Special...hell, I'd trade it all to be hit with a "Ton of Bricks" again.

I guess you know not to expect much when a record has such underwhelming digital cover artwork that you pine for the days of tightrope walking viking dames and guitars sitting in fucking smoke...or when the lyrics to the first tune ("Bulletproof") seem to be at least partially hinged on the deflection potential criticism the band or persons within might receive, 'I don't care what you think' type stuff, which is always hypocritical, because if you didn't, you wouldn't have written a song about it (ask Nas and Kanye West). I might be reading too much into that, of course, and it's possibly something more personal or specific in nature, but after the band's breakup and inevitable reunion it just comes off that way. Lyrics, however, are not really the problem with this album, nor is Ronny Munroe. He's his usual qualified self, a more polished alternative to the grating screams pioneered by Bon Scott and Brian Johnson and then cranked up a notch by Udo and Ronny's own predecessor David Wayne; and he's also responsible for the majority of the genuine energy on this disc.

Oh, the rest of the band plays at a youthful intensity across the ten tracks, seemingly recharged in the five years since This Present Wasteland, but the issue here is one of tremendously uninspired riff progressions that in almost every case go nowhere interesting. Variation and pacing isn't in question, because there's a decent range of material. "Dead City" is reminiscent of the late 80s/early 90s Megadeth slowed to a more controlled clip, where "Generation Nothing" itself has traces of modern Maiden interspersed into the classic Church edge. Must say that the lyrics to that title track were pretty cheesy, another of those critiques of the current 'video game generation' that seem a little trite; I mean, if the shoe were on the other foot, what would those kids say about a bland heavy metal record by a bunch of veterans who should be capable of far, far better? Don't get me wrong: Generation Nothing is a more productive life pursuit than another round of Call of Duty 4, but it's hardly all that creative, and this is just another of those topics that seems desperate, like Metal Church doesn't have anything more interesting to write about: it's 20-fucking-13...scathing indictments of couch potatoes were already exhausted by the 90s, dudes.

Really, though, most of the riff and chord choices on this disc are so vapid that Ronny could be singing about the weather for 53 minutes and it wouldn't make much of a difference. Aesthetically, Generation Nothing is quite loyal to all the prior records...an evolutionary fixture between thrash-lite Metallica and trad metal stuff like Priest, Purple and Krokus with some rhythmic nods to NWOBHM. It's not even until the middle of the record that you get anything bordering on a decent melody, but too rarely do they persist through the entire songs so it's always an exception to the rule. Without exception, the harder the band hits, the more entertaining they become...especially on a tune like "Scream" or wherever Munroe starts screaming to the point that it reminds me of Flemming Ronsdorf on Artillery's masterpiece By Inheritance. Unfortunately this is just too rare, too late, and when deconstructed even the riffing in these songs seems predictable and drab. The playing is pretty tight all around...except the clean guitar passages which seem colorless, but I'm just not hearing that mesh of killer vocal hooks and timeless rhythm guitars that defined The Dark.

Production has a good punch to it that compensates for the lack of thicker, saturated distortion to the guitar. Like their other popular post-80s works (Hanging in the Balance), you can tell they're definitely intent on sticking to that more classic metal appeal, but at the same time Generation Nothing seems to feel dry. The album holds together even at high volumes, but there's just not a lot of depth to the bass-lines or drumming to help round out those lukewarm riffs, and apart from Munroe it never feels like anyone is pushing himself to any limit. Musically and thematically, this is largely complacent and boring, and I'm just not the type to cry FUCKIN ACE MAN just because its another reunion record from a familiar logo. Hell, listen to the riffing brilliance on the new Satan or Attacker efforts, or the atmosphere on the latest Warlord. There's a lot of juice and creativity left in many of these once-forgotten 80s metal icons. But the simple truth is that Metal Church, no matter what the lineup, is superior to what they have released on this disc. It's not terrible, and there are a few bright spots, but Generation Nothing should be nothing BUT...and in the end, I've taken less away from this than anything they've done since The Human Factor...actually, less than even that.