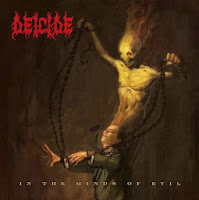 As readily accessible as this record is (for the death metal genre, at any rate), it was not one that I initially found a lot of value in. I was drawn immediately to the lead work, which is by far the greatest thing here, but otherwise it took some warming up to what I otherwise found a fairly standard/stock selection of old school Deicide riffing. Loads of tremolo picked passages over the faster beats throughout, and then a selection of chugging progressions that weren't exactly compelling. Now, granted I am not now nor have I ever been the biggest fan of this group...I like a handful of their records, the first two and Stench of the Redemption being the ones I break out the most, but certainly they have their place in the genre's history, and I wasn't too disappointed with their previous disc To Hell With God, which was essentially a slightly modern brutalization of their traditional style. Upon hearing that recent (and excellent) podcast interview with Glen Benton at MetalSucks, I was pretty pumped up to hear the new material due to his claim that it was some of the best they'd ever written...

But don't most musicians say that about each new release? In the Minds of Evil is not exactly their best material, but neither does it trail very far behind. Certainly it eclipses many of their mediocre records with ease, but I wouldn't be surprised if a lot of the fan base are sort of bored at this point, since Deicide does not seem capable of much nuance or progression from release to release, the greatest coming when they put out The Stench of Redemption with its blazing leads and heightened melodic sensibility (though even there, it was largely business as usual). That formula still exists here, particularly with the lead guitars, which I feel comfortable in claiming as the best they've implemented, or at least the most atmospheric, but it's the rest of the riffing that falls a little short, if mainly because I've heard it all before so many times, and there are just too many 'safe bets' in intervals and note choices that fail to generate the level excitement I wanted as the tunes surged into those immaculate solos. I had read somewhere that the lyrics to this were particularly weak, but having read through them I have to disagree...true, they're recapitulating a lot of the same points they've been hammering in since the eponymous debut in 1990, but composition-wise there's plenty enough effort. I mean, if you're looking for Milton-level authorship, you're in the wrong place to begin with.

One area where In the Minds of Evil never really drags behind is in its production, which is modern, beefy and extremely clean. Some diehards of the early 90s might be turned off that it's not that same sort of muffled and flawed Morrisound style they remember with such fondness, but I'm not complaining. Glen's vocals, which continue to focus on the decidedly guttural style rather than the dual imp/grunts on the 'classics', seem like they were very carefully produced, while the riffs have plenty of meat on them rivaled here only by Steve Asheim's effortless mastery of the rolling double bass beats and fits of blasting. Jason Suecof definitely reaffirms his love for getting that great kit sound, and keeping everything clear and in place. A few of the muted tremolo picked harmonies have a nice clinical edge to them that persists into the more effects-heavy solo sequences, but I would say there's a bit of sameness to a lot of the songwriting that doesn't create the most distinct or varied experience (something they've honestly never done). The bass even sounds audible, though he's not usually performing the most intriguing lines that could ever steal focus from the rhythm guitars (par for the course, since he's pulling double duty with the vox). Ultimately, as long as you're not averse to these older bands keeping with 'the times' in the studio, this sounds pretty massive in the speakers, and that's going to be the #1 appeal for a lot of younger fans checking this out. Deicide was never exactly a band chasing a grainy or lo-fi production, so this shouldn't surprise anyone.

In the Minds of Evil could rightly be compared to Legion or Once Upon a Cross, with a few hints of Blessed Are the Sick or The Bleeding, apart from that meatier contemporary studio appeal. It's neither an exemplary or innovative offering, but at least a satisfactory one within its own restraints. Benton and crew seem complacent to the fact that they're an old school death metal band, and they simply seek to hone that craft to perfection time and time again. Similar to the Vader formula, but where records like Welcome to the Morbid Reich, also endowed with killer leads, are ecstatic, passionate and unforgettable, In the Minds of Evil ventures across the finish line into acceptable territory and then collapses, unwilling to stay up all night to celebrate its success. Functional, workmanlike death metal with a lot of chops you've heard before, altered marginally and dressed up with screaming, eloquent excursions higher up the fretboard. Honestly I got more out of this than To Hell With God, but I'm still privately hoping that Deicide will one day release the utter masterpiece it should have required to deserve the status it has achieved. These guys were pretty tight in the beginning, and over the past 3-4 albums they've clearly returned to that level of proficiency and teamwork with the newer members...but there's still not an album in their catalog to effect me as profoundly as a Left Hand Path, Realm of Chaos or Consuming Impulse. That said, the effort placed in records like this one show me that COULD happen, so I can't cross hope off the list just yet.