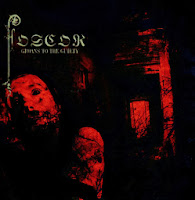 Of the tens of thousands of metal records I've listened to over the past 30-odd years, I'm willing to bet that by this point, black metal has claimed the largest individual slice of the genre-pie. That's to say, I've heard more black metal than any other style, largely due to its proliferation through the 90s and its very opportunist, individualistic nature...that is to say, in additional to the traditional band structure, you have single persons or smaller groups that are capable of churning out dozens of albums by themselves. As a result, the endless repetition of aesthetic tropes has forced upon me a jadedness that is difficult to pierce...I am fully capable of appreciating a straight up old school black metal recording if it's absolutely sinister or chilling and well done, but it's the potential for nuance and novelty that still beckons to me most, something that Spaniards Foscor ('Darkness') flirt with on their third full-length Groans to the Guilty.

By and large, this is a fairly conservative approach to black metal with roiling, tremolo picked guitars and voracious rasped vocals, blasting and double kick beats aplenty, and not much separating it from numerous other entrants into the medium. Where it differs in in the structure of the riffing, or more specifically the choices of chord-floods which are often a little warmer in nature, to the point you might better equate them with a more 'gaze' or post-rock atmosphere, only they're set straight into a rhythmic foundation that draws from Mayhem, Darkthrone, and likewise a lot of the dissonant note selections (minor chords) that drive the music are pretty much straight from the Scandinavian school. But these guys clearly are interested in going a little further, fucking with the frets on their guitars and implementing enough variation and unexpected nastiness on the ears that it keeps Groans fairly interesting throughout. Granted, there are still a number of the riff patterns that seem underdeveloped or just predictable, but Foscor switch them up frequently enough that I never felt as if I was faced with just another bland, endlessly repetitive black metal record which could put me to sleep if I wasn't in the mood...this might not be an 'excellent' album, but it is captivating.

The vocals definitely have that South European/Mediterranean slant to the snarl common in bands from Spain, Italy and Portugal, which is highly enunciated and carries with it a natural, deeper bark that I'm guessing; but Fiar also manages a tortured, slightly higher range in his delivery that once again rewards the listener with some variation. I really enjoyed that slightly spoken word-like passage at the intro to the title track (and album); he confers a lot of passion and creepiness in there that worked well with the more exotic, Middle Eastern feel of the guitar melody there, something I actually wished had popped up more often on the remainder of the disc. I also liked the other mild sense of 'experimentation' here like the instrumental "La Incertesa Del Plaer" which is built of cleaner guitars, a light and shuffling drum beat and some simplistic, noisier drones before ceding into ambiance. It's good for a band to pace itself properly and offer some respite from a constant barrage, especially when you plan on meting out nearly 50 minutes of intensity, so Foscor earn some credit for not resorting to a monotonous barrage of samey sounding songs, though I would not stop them from extending themselves even further into the dynamic and unexpected.

A few more interesting techniques here were how they mixed the drums just ever so slightly lower than you might hear on a lot of comparable records. Still quite audible, but clearly meant as a more lulling component that doesn't steal away the weight from the guitars or vocals. The bass-lines are thick and hypnotic though they tend to follow along with the arc of the rhythm guitar and could use some more interesting digressions, fills or grooves to celebrate the tone. There was a bit more equilibrium in the mix of the previous record, The Smile of the Sad Ones, but ultimately Groans to the Guilty has a bolder flavor, a rich depth to it that isn't unlike tasting a fine coffee for the first time. It's as raucous as black metal intends, but also sublime. There is a real sense of craft and artistry here, with some great packaging, eerie and unusual, image-heavy lyric themes that are split relatively equally between English and Catalan. The comparisons to Shining and Satyricon on the sticker are not off the mark, and while the album is not at a level which will resonate with me forever, Foscor proves, more than ever before, that they are worth taking seriously and looking further into.