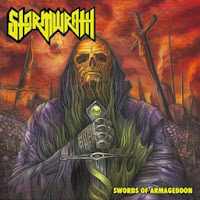 Posthumous album reviews for newer bands have always been a little strange for me, if only because I feel like I just missed some party that I was invited to...perhaps the card got lost at the post office, or a jealous neighbor swiped it and then impersonated me for free liquor, but I feel this sudden sense of tragedy. Of course, it might be for the best in this particular case, because I get the feeling any party with Valencia's violent Stormwrath would have involved lots of bottles being broken over my head and spikes impaling my flesh from all the moshing and bear hugging. Swords of Armageddon, adorned in beautiful cover art that will instantly appeal to fans of groups like Skeletonwitch, Toxic Holocaust and Lich King, is the group's only album, in fact their only release that I know of, and while it's a candle of incendiary 80s-styled thrash that burns out a little too quickly in terms of ideas, these guys were clearly no hacks...I mean they have a drummer named 'Hellstabber'. You don't get to DO that without a majority consensus of approval from some daemonic house of representatives.

To be more specific, what Stormwrath were going for here was a more 'blackened' or 'deathened' take on some of the more extreme thrash acts of the 80s. In particular, there is a massive Slayer influence in how they construct their faster picking, not to mention the moodier, slower songs like "Black Legions" in which the drumming and rhythms and cleaner backup vocals seem to have a little South of Heaven inspiration. But I don't think you could exclude some Sodom and Kreator influence which is felt in the harsher vocals that sound like a median between the styles of Mille Petrozza and Tom Angelripper, and also the warlike sort of riffing sensibility that this album constantly evokes. To their great credit, Stormwrath seems to involve a measure of versatility you don't always hear on a lot of these post-Teutonic retro-thrash outings, and that's probably because most of the guys involved with this have also played (or are still playing) in other acts as ranged as Graveyard, Altar of Sin and Extreme Noise Terror. I won't laud Swords of Armageddon unendingly, because it's nowhere near as charming and memorable as its spiritual forebears in the 80s, but this album never feels like a cheap ploy to cash in on a prevailing trend. It's rather genuine...

...just not entirely compelling. Namely, most of the faster riffs here just seem paraphrased from a grab bag of thrash to predate them, and there are treacherously few that stand out. The guitar tone is robust and fat, and often to the detriment of the harsh vocals that seem somewhat monotonous as they bark out their lines...but without a number of striking note progressions that gave US and German thrash such distinction when they arrived, the music here can only connect with me on a visceral level. The leads and transitions are all pretty well integrated, but these too don't really evoke memorable moments that beg of me to replay the record. At best you'll get a few of those creepy Slayer harmonies like the one near the end of "Militant Messiah", and enough of a balance being struck between the fits of speed and the chuggier groove passages. Surely you can headbang along to Swords of Armageddon, but if you're trying to summon up a chorus phrase in your head while driving (like "Nuclear Winter", "Pleasure to Kill" or "Mad Butcher") it's probably not going to happen...Stormwrath means well, but you can probably figure out why they themselves decided not to stick around too long: it's been done, and so much better.

But on the other hand, that means the record sort of serves its purpose. It's pounding and angry, especially the drum mix which sits right alongside those pudgy guitars, and the entire low end sounds good on your speakers. The lyrics are pretty good, in fact they lit a fire under my ass almost more than the music itself did, and there's no built-in advertising 'we are soooo thrash' bullshit. Stormwrath wanted to pay tribute to the music that inspired them in their several other projects, and that is precisely what this does. It's competent and moderately well executed, just not too inspiring in of itself. I'd compare it to a group like Germany's Cruel Force, where the authenticity of the experience trumps the songwriting. Not as acidic or volatile as Antichrist's Forbidden World, which is perhaps the best example of this throwback action I've heard in a great long time, because the riffing and vocals are so excellent and infectious. But Swords of Armageddon is decent, it's not a bunch of poseurs pulling your chain, and the seriousness of its construction goes a long way towards a hearty respectfulness, even if this is a party we can all survive missing out on.