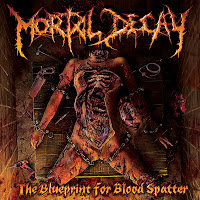 Well, after quite a lengthy hiatus, eight years to be exact, the followup to Cadaver Art has at last arrived and presents us with another fairly standard variety of brutal death tropes drawn from both the late 80s/early 90s emissions of bands like Suffocation, Pestilence and Deicide as well as their own later 90s peers like those I named above, or None So Vile-era Cryptopsy. On the plus side, the level of exaction and musicianship here pretty much destroys their older offerings, with some phenomenal bass lines/fills and a drop of a dime precision punch between brutal chugging passages and flights of frenzied, clinical harmonies that do the cover artwork much justice. It doesn't hurt that they've wrangled a few members of Malignancy into the roster here, and ramped up their own individual skill levels, this is that same surgical sensibility that Masticate to Dominate and To Desecrate and Defile celebrated, leaving the listener stuck between both the bludgeon and the scalpel, both pretty equally effective as implements of aural destruction. I honestly do not have a lot of complaints about The Blueprint for Blood Spatter: If you've heard their prior output, it delivers...but just how much?

Danny Nelson's vocal performance here doesn't really deviate much from Malignancy or a wealth of other bands on that same level...grunts and snarls derived from Barnes, Benton, Fisher, Vincent and maybe a little bit of Will Rahmer, without much distinction of their own. The guitar playing is quite diverse, though, ranging from small shots of dissonant higher string chords to spiraling body bag melodies and then plenty of bursts of blasting fortitude, broken up by groove hooks that thankfully never feel too cheap, though a number of the palm muted progressions are bland and mildly uninspired. The drums are just about unstoppable, with a load of points where the bulk of the guitars will disappear and Anthony Ipri is left to import some creativity and almost perform drum solos to the listener's anticipation of their re-emergence ("Chloroform Induced Trance"), and the bass playing is just fucking awesome with tons of farting, murky, bubbly squelching pops and melodic fill runs that help fill in any creative void left by the two guitarists. The Blueprint as a whole is one of low-end propulsion and instinctual, chaotic celerity...well plotted, but jerky to the degree that you can't always predict exactly what will come next in any situation, so it's a fun record to explore.

That said, will it top mine or many other death metal buffs' year end lists for 2013? I can't say that will be the case personally, but not for any lack of trying. It's no Colored Sands, Kingdom of Conspiracy or Pinnacle of Bedlam, but clearly there were tunes here like "Jugular Gurgle" and "Chloroform Induced Trance" that I felt myself eagerly returning to; this just isn't a consistent quality across all the album. Mortal Decay sounds on point, to the extent that the eight year absence is easily forgiven and it sounds appropriately like Cadaver Art's more adventurous and unrestrained younger sibling, but there are places where the group lacks a little character to separate itself from a large swath of its peers. Still, I do feel like execution and planning of this Blueprint are adept enough that it wouldn't take many more trips to the drafting table to transform this band's capabilities into something truly extraordinary.