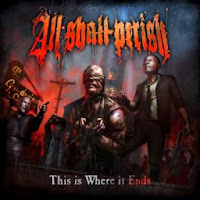 Disclosure: I still dislike the All That Perish logo, but this fatter version of it is aesthetically more pleasing than its predecessors, which seemed like they were about to dissolve right off the album covers. So, yeah, the font choice is still pretty dated, a 90s, tattooed tough guy relic (which might be more acceptable if these guys were an NYHC band), but for once it doesn't look like an ugly scratch distracting from the artwork. Also, if you'll pay attention to the title coloring, the fiery 'Ends' seems like it just might be hinting at This is Where it Ends as a swan song for the band; not that they made such a claim, and we now know it not to be true, unless they decide to call it quits now that Hermida has moved on to Suicide Silence, but I can't help but feel a little gypped. This is Where it ENDs. Sad times? Good riddance? Don't let the door hit your ass on the way out? That will really all depend on the music...

And yeah, this is probably the best All Shall Perish record, by baby steps if not a country mile. Or at least, the one I'd point out if someone asked me where to begin with their catalog. Not that I'd recommend this band over others in their niche, but at least they've maintained an upward momentum throughout the four records that hints at further greatness. For the most part, This Is Where It Ends plays out like a hybrid of faster-paced brutal death metal and At the Gates-styled melodic stuff, with the band integrating more dissonance and interesting embellishments to their chug-off breaks, and a better hand at integrating a more fulfilling, psychotic atmosphere into the tunes occasionally via whispers, spoken word, etc. Granted, there are times when this plays out like a pretty straight AtG-melodeath extravaganza with little of its own personality, such as the opening to "There Is Nothing Left", or the verse of "The Past Will Haunt Us Both", which are a lot like The Black Dahlia Murder's pugilistic spin on Slaughter of the Soul, but elsewhere you've got really bouncy, djent-like brutality, or Necrophagist-style lead technicality and it ultimately creates a fair balance over the 12 tracks.

I pretty much lost any interest in Hernan Hermida here, because he really just sounds like another standard Tomas Lindberg with some deeper growls that he can shift back and forth into. There is obvious anger like you'll find on any deathcore outing, but his retching doesn't seem remotely distinctive, nor as vicious as his peers like Trevor Strnad or the late Mitch Lucker, who he is now replacing (good luck with that). The songwriting here is also so busy that I often lose Mike Tiner's bass lines in the mix, apart from the few softer moments where he can stumble through. It's just that the tunes rely on such a hectic pile of precision riffs that my ears had a hard time following anything other than the guitars of Beniko Orum (who was on his last leg with the band) and newcomer Francesco Arturato, which take center stage. The new drummer Adam Pierce is also good, but like most modern brickwork players, his hard strikes and technical prowess just don't seem to distance him from any of a widening pool of peers who play at the same level. There's really just not a lot of personality anywhere on This Is Where It Ends...the record functions more as a technical behemoth where the riffs and tempo shifts take charge.

Fortunately, they really do take charge, and a few tunes like closer "In This Life of Pain", with its traumatic transition from piano to intensity. actually stand to memory awhile after the dust clears and you've moved on to something else. What I appreciated was that the constant strands of melody over the album keep the material fractionally more compelling than if they went with the bare, punchy rhythms...nothing bewilderingly complicated, but lots of distractions, and an overall incline in maturity. The drawback is that this is just not much of a creative boost over Awaken the Dreamers, and it would be difficult to pick this band out of a lineup of others who attempt to fuse those same hardcore/metalcore backgrounds into their Suffocation, Morbid Angel and At the Gates influences. The great attention to melodic and harmony detail here does ultimately negate any ability for the music to become frightening, tortured or genuine. This Is Where It Ends is ultimately a clinical, meticulous study in modern 'extreme' metal that lacks the timelessness of hooks that defines what might make a 'classic' record in this field. From a technical standpoint, it doesn't disappoint, but I want a little more tangible, memorable emotion, and sadly they've yet to produce something that I'd choose to quantify/rate as a 'good' album. This is another close call, but that's the best I can say, and there is not a major gulf in quality between this and the two albums preceding it.