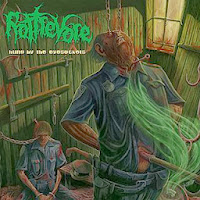 While I've always enjoyed Rottrevore well enough, I can't say that I am or was ever immune to the opinion that they were a bit of an 'also ran' to that OTHER Pennsylvanian death metal juggernaut. You know the one, and if you don't then you're probably not reading this to begin with. Now don't get me wrong: Iniquitous was never quite so ominous, malignant and claustrophobic as an Onward to Golgotha...the album seemed so slightly more straightforward and I daresay 'brighter' than its better known peer, which I'm not shy in admitting used to scare the fuck out of me when I was younger. But on the level of technical merit, the two were comparable and both have retained a lot of their timeless, oppressive quality even after the span of two decades. So, when first listening to Hung by the Eyesockets, I was taken aback by how little had changed for Rottrevore in 20 years...

I guess it makes sense: there haven't really been any releases in the interim to make those evolutionary baby steps that mark a band's passage through the aeons. For example, if you were to listen through Vanquish in Vengeance and then compare it back to Mortal Throne of Nazarene, there would be some disparity in performance and theme which come naturally with such a lengthy progression (though Incantation has never entirely deviated from its Relapse Records roots). But apart from a few production tweaks, Hung by the Eyesockets sounds exactly like the three songs stepped out from the Iniquitous recording sessions, went out to a bar and got so drunk and hungover that they couldn't make it back the next morning. Now their night of debauchery is revealed! The tone of the guitars is indeed more rank and voluptuous, and in fact I'd say it sounded a fraction more 'Swedish' than the bulky Autopsy crunch of the debut album, but it largely recaptures the more hellish grinding and groovier moments of the ancient full-length like flies in amber.

I did feel like the drums on this thing were a level or so too loud in the mix, to the point that they can clutter up my appreciation of the guitars. Funnily enough, this is a trait I'd also attribute to Putrevore, the amazing Spanish/Swedish collaboration which seems in part like a tribute to this very band (or at least the Penn State inspired brand of death metal subterranea). In the end, though, I could make out most of the riffs, and while they were nothing extraordinary in terms of Rottrevore's past, they're convincing enough. The leads are quite clamorous and murky but then this isn't Eddie Van fucking Halen to begin with, so the dissonance and chaos implied seem to at least prove a fit to the rhythmic structure. Bass tone is a bit too smooth, I would have preferred something more dissonant to stand out against those repulsive guitars; the intensity of the playing here ensures that it is less noticeable than on Iniquitous, but the whole experience is just so low end and brutal that you won't notice the difference unless you're specifically listening for that. Most importantly, Chris Weber's nihilistic guttural sounds fantastic...I always thought he was the logical competitor to Craig Pillard, and comparing him to the vocals on the Disma debut...

These myriad reunions always generate some natural controversy, since it seems the bands only reform when the style of music they once helped pioneer has appreciated in audience (thanks, internet), and at a time when bands like Convulse and Purtenance are also pinching off new loaves of loathsome, ugly death metal on the Finnish side of the pond, why not Rottrevore? Has Abhorrence re...yes, yes they have. What about Demilich? Eh, Nespithe is perfect enough that I don't need another. Ultimately, wehen we're dealing with this very inaccessible side of the genre-spectrum, though, it's difficult to believe that the groups are in it for anything more than nostalgia. Autopsy might be able to afford a tour bus, but Rottrevore will not be moving up to the top floors of Trump Tower, or purchasing a Fiji island anytime soon. So, yeah, if you did enjoy Iniquitous and sought more of the same in the ensuing decades, I cannot imagine the squamous slaughter present throughut Hung by the Eyesockets will deeply offend you. It's certainly nothing amazing, but it IS pretty intense, and while it was originally only available as a digital release last year (called Blind Sided Attack), a proper MCD has been pressed by XTreem Records, allowing Dave Rotten (who by no coincidence is the vocalist for Putrevore, in addition to Avulsed) to keep his heroes in-house.